Thijs Porck teaches Old English, Middle English, Tolkien and Medieval Studies at the Leiden University Centre for the Arts in Society. He is a cultural historian of early medieval England, with a background in medieval history as well as English language and literature. The common strand in his research is gaining an understanding of Anglo-Saxon culture and of how modern generations have interacted with this early medieval heritage, in both scholarship and popular culture. He has published on Beowulf, Old English textual criticism, Tolkien studies and the history of Anglo-Saxon studies. His latest monograph Old Age in Early Medieval England: A Cultural History (2019) is the first book-length study of the cultural conceptualisation of growing old in Anglo-Saxon England. He is currently working on three edited volumes, on the life course in early medieval England, digital approaches to Old English lexicology, and 20th- and 21st-century recreations of Old English, respectively.

You can find out more about him and his research on his personal website and blog: www.thijsporck.com. For a full version of his CV, click here.

He teaches Old English, Middle English, Tolkien studies and Medieval Studies in the BA English Language and Literature and the MA Literary Studies: English Literature and Culture at Leiden University. He is also the current coordinator of the minor programme De Middeleeuwen en de vroegmoderne tijd. You can find out more about the courses he has been involved in here:  https://thijsporck.com/teaching/. This website also includes an overview of his projects in teaching innovation.

BA, MA and PhD thesis supervision
Porck supervises any thesis on Old and Middle English language and literature; Anglo-Saxon culture and history; medievalism; and fantasy literature (especially Tolkien). For an overview of BA and MA theses he has supervised as a first reader, see: https://thijsporck.com/teaching/thesis-supervision/

He is also available for PhD supervision in his field of expertise; he is currently the co-supervisor of two PhD-students:

Conferences
Conferences are a vital element of academic life. An overview of the conferences organised and a list of conference papers presented can be found here: https://thijsporck.com/conferences/

Press and popularisation
Porck shares his knowledge of the history, culture and language of the Middle Ages with people in- and outside academia. His research blog www.thijsporck.com/blog (active since October 2015) has had over 220.000 views by more than 160.000 unique visitors. He is also one of the editors of the Leiden Medievalists Blog. He is also active on Twitter and YouTube.

In addition, he has given over eighty public lectures on various topics, such as Tolkien’s The Hobbit, movie adaptations of Beowulf, King Arthur, The Norman Conquest, Dr Who in Anglo-Saxon England and Anglo-Saxon anecdotes. His  lectures are part of  Kennis op Straat, an online platform developed by De Jonge Akademie (KNAW / Royal Netherlands Academy of Arts and Sciences). For an overview of his efforts so far, see: https://thijsporck.com/press-and-popularization/. In 2020, he was awarded the LUCAS Public Engagement Award.

Key publications
For a full overview of his publications, with Open Access options where available, see: https://thijsporck.com/research-and-publications/ 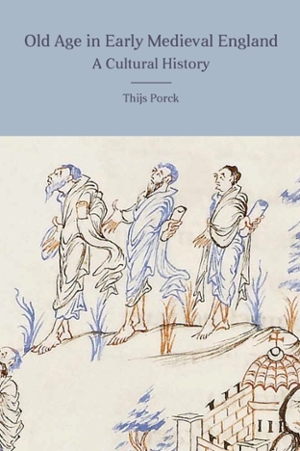 This first full survey of the Anglo-Saxon cultural conceptualisation of old age, as manifested and reflected in the texts and artwork of the inhabitants of early medieval England, presents a more nuanced and complicated picture. The author argues that although senescence was associated with the potential for wisdom and pious living, the Anglo-Saxons also anticipated various social, psychological and physical repercussions of growing old. Their attitude towards elderly men and women – whether they were saints, warriors or kings – was equally ambivalent.

Multidisciplinary in approach, this book makes use of a wide variety of sources, ranging from the visual arts to hagiography, homiletic literature and heroic poetry. Individual chapters deal with early medieval definitions of the life cycle; the merits and downsides of old age as represented in Anglo-Saxon homilies and wisdom poetry; the hagiographic topos of elderly saints; the portrayal of grey-haired warriors in heroic literature; Beowulf as a mirror for elderly kings; and the cultural roles attributed to old women.

In an age before the Cloud and social media, scholars relied on letter-writing for collaboration, peer feedback and the building and sustaining of academic networks. Furthermore, since bringing publications to print was a slow and laborious process, letters were considered a quick and efficient way to share one’s insights, data and discoveries with colleagues. As such, scholarly correspondence is an important source for the history of philological scholarship. Indeed, as Ton van Kalmthout explains in the first contribution to this special issue, the value of such epistolary evidence is threefold: letters are a medium for knowledge transfer, they allow the reconstruction of the social and institutional contexts in which knowledge was gathered and disseminated and, as private documents, they give an insight into the personalities and ambitions of the scholars involved. Further contributions to this special issue demonstrate these unique qualities of correspondence.

This collection celebrates the thirtieth anniversary of the Dutch Society for Old Germanic studies, the Vereniging voor Oudgermanisten. The collection brings together contributions by both veteran and early career members of the society and centres on the theme of the encounter between the familiar and the foreign. the articles are representative of the broad scope of Old Germanic studies, ranging from philology to historical linguistics, through to history, text editions and manuscript studies, and spanning the geographical area from Iceland to the Mediterranean. The topics covered include cultural contact, literary representations of the ‘Other’, loan words, contact-induced sound changes, distinctive linguonyms and obscure riddles.