Recently, archeologists of Leiden University made an excavation in Oegstgeest, where they found a unique silver bowl from the first half of the seventh century as well as imported pottery and winebarrels. Thijs Porck, lecturer in Old English language and culture at Leiden University, places the Oegstgeest finds in a literary-historical context. "It wouldn't surprise me if the Leiden archaeologists soon encountered a pair of oversized bones."

Recently, archeologists of Leiden University made an excavation in Oegstgeest, where they found a unique silver bowl from the first half of the seventh century as well as imported pottery and winebarrels. Thijs Porck, lecturer in Old English language and culture at Leiden University, places the Oegstgeest finds in a literary-historical context. "It wouldn't surprise me if the Leiden archaeologists soon encountered a pair of oversized bones." 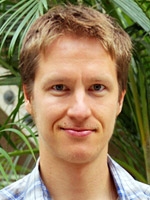 According to an early medieval ‘book of monsters’, the bones of the sixth-century, gigantic king Hygelac were shown to travellers on an island in the Rhine, where this river flowed into the sea. Recent excavations in Oegstgeest and the finding of the unique silver Oegstgeest bowl have brought to light international activities in the Rhine estuary in the early medieval period.

As such, this excavation may hold a clue to the location of the bones of Hygelac, who is also mentioned in the Old English poem Beowulf.

A book of monsters

Hermaphrodites, dragons, centaurs, pygmies, elephants and a whole lot more. Around the year 700, an anonymous Englishman wrote the Liber monstorum de diversis generibus [The book of monsters of all sorts] and provided an overview of the ‘freaks of nature’ that he had heard and read about. A ninth-century manuscript of the text is currently held in the University Library in Leiden (VLO 60).

In this text, the author describes Hygelac, a gigantic king of the Geats (a people that lived in southern Sweden):

“There are also monsters of an incredible size, such as King Hygelac, who ruled the Geats and was murdered by the Franks; from the age of twelve, no horse could carry him. His bones are preserved on an island in the River Rhine, where it flows into the sea, and they are shown to travellers from afar as a marvel.”

Apparently, an Englishman around the year 700 had heard about an island in the Rhine estuary, where travellers would come from far away and where they would be shown the gigantic bones of Hygelac. Could this be Oegstgeest? And who was this King Hygelac?

Oegstgeest: An island in the Rhine

Present-day Oegstgeest certainly does not look like an island, but the medieval situation was wholly different. The name Oegstgeest derives from the personal name Osger and the Middle Dutch word ‘geest’, a term denoting a raised area of sandy soil. In the Middle Ages, Oegstgeest would have been more elevated than the surrounding landscape, which consisted mainly of water (the Rhine and various waterways) and marshland. As such, medieval Oegstgeest may very well have been considered an island in the Rhine, which then still had its main estuary in nearby Katwijk.

The recent excavations in Oegstgeest uncovered not only the unique silver bowl, but also imported pottery and wine barrels. Together with the previous find of an Anglo-Saxon belt buckle in nearby Rijnsburg, these discoveries are indications of international activity in the Rhine estuary in the early medieval period. These archaeological discoveries might now be linked to the text of the Liber monstrorum and the island in the Rhine estuary where, according to the English author, “travellers from afar” were shown the bones of Hygelac.

Although the Liber monstrorum is the only text to comment on Hygelac’s size, the death of King Hygelac around the year 525 AD is described in three early medieval texts. The historian Gregory of Tours (ca. 538-594) writes that Hygelac died in a naval battle, as he returned from a raid to the north of Gaul. The anonymous Liber Historiae Francorum, written two hundred years later, tells a similar story, but places Hygelac’s raid in the area inhabited by the “Att-oarii”, a people that possibly lived near Nijmegen.

Hygelac is also mentioned in Beowulf, a long poem in Old English (the language spoken in early medieval England). The poet describes how Hygelac took on the combined forces of Franks, Frisians and “Hetware” (the “Att-oarii” of the Liber Historiae Francorum) and that he died in Frisia.

Hygelac came sailing with a naval army to Frisia, where the “Hetware” assailed him in battle. They acted with courage and superior force, so that the byrnie-warrior had to bow down, he fell in the battle; this leader by no means gave treasures to his warriors.

In the Early Middle Ages, ‘Frisia’ was larger than present-day Friesland and it extended along the North Sea coast, from North-Western Germany south to well beyond the Rhine estuary.

Concerning the location of Hygelac’s death, the early medieval sources are not in agreement: to the north of Gaul, near Nijmegen or in Frisia? The naval battle of Gregory of Tours, the mentioning of the Frisians in Beowulf and the text of the Liber monstrorum all seem to indicate a location at least close to the North Sea.

Hygelac’s bones have never been found. In the fifties, a scholar suggested that the bones may have been kept on the island Goeree Overflakkee. Given the recent archeological excavations and the evidence outlined above, Oegstgeest within the Rhine estuary seems to me a more likely option. Due to the scarcity of sources for the Early Middle Ages, the best we can do is speculate, but I would not be surprised if the archaeologists in Oegstgeest were to stumble upon some gigantic bones in the ground!