On Friday, the 24th of April 2015, the Junius Symposium voor Jonge Oudgermanisten, a symposium for junior researchers in the field of language, culture and history of the (early) medieval Germanic tribes, was organized by Peter Alexander Kerkhof (LUCL) and Thijs Porck (LUCAS). 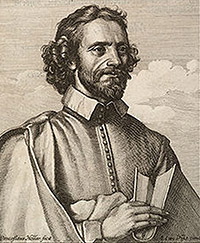 In the year 1615, the twenty-four-year-old theology student Franciscus Junius will often have walked past the county tribunal which is now known as the Gravensteen. Many years later, this former Leiden student became one of the leading academics of the Low Countries and did pioneering work on the study of the Old Germanic languages. Back in 1615, as Junius passed the Gravensteen, he could not have foreseen this grant academic future; nor could he have known that 400 years later more than fifty researchers would be sitting in that very building, attending a conference named in his honor: the Junius Symposium voor Jonge Oudgermanisten (Junius Symposium for Young Old Germanicists).
The Junius Symposium for junior researchers in Old Germanic Studies was held on Friday the 24th of April, organized by Peter Alexander Kerkhof (LUCL) and Thijs Porck (LUCAS). The symposium was supported by both the LUCL and LUCAS institutes of Leiden University and by a generous donation of the Vereniging van Oudgermanisten. The symposium was intended as an academic platform for a new generation of young scholars in Old Germanic studies. Even though there are many such scholars in the Netherlands, the overarching discipline of Old Germanic studies seems to be gradually receding into the shadows.

Building bridges for a new generation of scholars

As the older generation of Old Germanicists is reaching the retirement age, the younger generation is scattered over the different departments of the Dutch universities (Literature, History and Linguistics).
Because of this academic fragmentation, a PhD-student in English philology may not be aware that another researcher is working on Old High German manuscripts in the building right next to him. The goal of the Junius Symposium was to bring young scholars like these together and, as such, facilitate cooperation between the disciplines and promote the visibility of Old Germanic studies in general.

From Charlemagne’s Saxon wars to an Old Germanic sound law 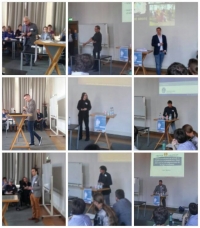 On the day of the symposium, about fifty-five students and scholars from Leiden, Amsterdam, Utrecht, Nijmegen and Groningen convened in the medieval hall of the Leiden Gravensteen building. The Junius Symposium started with an opening paper by prof.dr. Rolf Bremmer, professor of English philology, about the contributions of Franciscus Junius to the field. In the following sessions, seven junior researchers presented their papers, from philological, linguistic and historical perspectives.
Each paper was an innovative and exciting contribution to Old Germanic studies and showed the multi-disciplinarity of the field: Robert Flierman, a historian who recently got his PhD at Utrecht University, discussed one of Charlemagne’ s laws implemented against the Saxons during the Saxon Wars, Seán Vrieland (a PhD fellow at the University of Copenhagen) discussed the possible linguistic relationship between Gutnish and Gothic and Sander Stolk, who received his MA Literary Studies in Leiden, presented a new digital tool for the study of the Old English lexicon. The papers that followed a short lunch break were equally diverse. After a discussion of the Indo-European conditions for an Old Germanic sound law by Jenne Klimp (University of Groningen), Ilona Paulis (Radboud University Nijmegen) presented a new approach to Old English poetry, linking the use of metre to narratological content. The last two junior speakers came from Leiden University: the linguist Simon Mulder discussed Germanic loanwords in Finnish, while the historian Daan Keijser dealt with the concept of nakedness in Old Frisian law codes.
Fortunately the technicalities of the different disciplines did not distract from the common interest of both speakers and audience: the fascinating world of the language and culture of the early medieval Germanic speaking peoples.

The Future of Old Germanic Studies 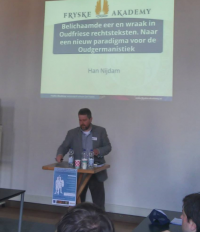 In the afternoon, the keynote lecture was given by dr. Han Nijdam (Fryske Akademy) who presented a new paradigm on Old Germanic cultural reconstruction. The discussion that followed voiced the need for a new dialogue with historians, archaeologists and folklorists. Another conclusion was that the field of Old Germanic studies has new opportunities that were lacking to previous generations: the memory of the abuse of the term Germanic by the Nazi’s is fading while the interests of students in early medieval culture is growing as a result of the popularity of J.R.R. Tolkien, Game of Thrones and Vikings. In these times when the humanities are undervalued and the call for interdisciplinary research is heard all around, courses like Gothic and Old English succeed in catering to large groups of students, many of whom are ready to follow in Junius’ footsteps. If there was ever a time to rekindle the multidisciplinary field of Old Germanic Studies it is now. The Junius Symposium has provided a first spark and the fifty-five visitors of the symposium will undoubtedly feed the flame.