Joanita Vroom is Professor in Archaeology of Medieval and Early Modern Eurasia, specializing in the material culture of the 7th to 19th centuries. She is also Head of the Department of World Archaeology. 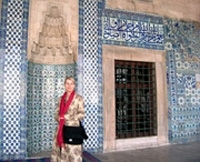 Joanita Vroom is Professor in Archaeology of Medieval and Early Modern Eurasia, specializing in the material culture of the 7th to 19th centuries. She takes a special interest in the social-economic (production and distribution) and cultural aspects (consumption, cuisine and dining habits) of ceramics. Using an interdisciplinary approach and a long term perspective on intra-regional and inter-regional networks, she studies many key collections of Medieval and Post-Medieval pottery from urban and rural sites in the Adriatic Sea, the Aegean, the Near East and the Persian Gulf.

“Apart from my ongoing work on the production, trade and consumption of Byzantine, Islamic and Ottoman ceramics, I will pursue my interests in short- and long-distance contacts along various networks on the Eurasian continent, including the Silk Road and the Crusader routes. Thus, I will continue the efforts to give Medieval and Early Modern Archaeology a truly global perspective and to study the dynamics and interconnectivity of local cities and regions in the perspective of the wider world. In short, my goal is to link the local with the global: from Dorestad to Xi’an!”

Her application in 2009 for the substantial research project Material Culture, Consumption and Social Change: New Approaches to Understanding the Eastern Mediterranean during Byzantine and Ottoman Times was accepted by the Netherlands Organization for Scientific Research (NWO) in the form of a 5-years VIDI-grant (2010-2015).

Furthermore, NWO has awarded her in 2018 with the Aspasia grant of €200,000 for excellent female researchers. She will use this grant to develop a new line in research and education, focusing on the long-term dynamics of Medieval and Post-medieval material culture in the eastern Mediterranean and adjacent Near East (600-1900 AD).

Involvement in excavations and surveys

Until now, Joanita Vroom has been working for 31 projects with ca. 25 universities (14 European, 11 non-European) and ca. 14 scientific institutes (8 European, 6 non-European). She is active as pottery specialist for international excavations and surveys in:

In 2011 she organized the ‘First Amsterdam Meeting on Byzantine and Ottoman Archaeology’ at the University of Amsterdam on the current state of Medieval and Post-Medieval archaeology in the Mediterranean area. To mark this event, she organized the simultaneous exhibition ‘Life among Ruins’ at the Allard Pierson Museum in Amsterdam, highlighting the complex relation throughout the ages between archaeological remains and daily life in the Mediterranean. The ‘Life among Ruins’ exhibition is still on show online: Life Among Ruins.

Furthermore, Vroom was involved in advising various major exhibitions (e.g., in the Museum Boymans-van Beuningen & in the World Museum at Rotterdam). She is currently contributing author of ‘The Oxford Dictionary of Late Antiquity’ and ‘The Cambridge Handbook to Byzantine Archaeology’, and series editor of the book series ‘Medieval and Post-Medieval Mediterranean Archaeology’ at Brepols Publishing House (Turnhout, BE). As  president of the Society ‘Byzantine Studies Netherlands / Byzantijnse Studies Nederland’, she  represents the Dutch Byzantinists at the ‘International Association of Byzantine Studies / Association Internationale des Études Byzantines’ (AIEB).