Abrupt Climate Change and Cultural Transformation in Syria in Late Prehistory (c. 6800-5800 BC)

This abrupt climate change of 8200 years ago (the so-called 8.2k calBP climate event) has received wide attention among natural scientists, also because of today's rapid climate changes and their impact on our own society. The archaeological implications, however, have not been investigated so far. This research programme is based on extensive recent fieldwork at Tell Sabi Abyad in Syria, a unique excavation and the only one where the relevant occupation layers from 6200 BC have been uncovered. The research treats a number of important cultural and ecological changes that have not been dealt with before in Near Eastern archaeology.

The project includes the analysis of natural isotopes, animal bone material, fossil plant remains, architecture, settlement history and material culture. An essential part is the reevaluation of existing concepts and explanatory models for the Late Neolithic period. The integration of new data and insights from recent fieldwork will throw a completely new light on what has so far been one of the darkest periods in the history of the Near East. 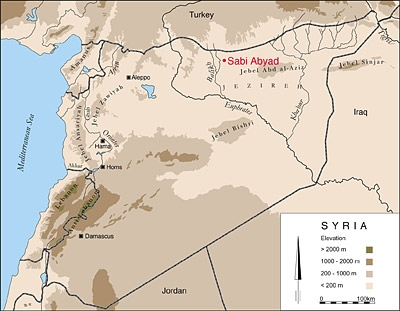 Archaeological investigations into the origins and development of complex prehistoric societies in the Near East focus mainly on the Early Neolithic period, c. 9500–6800 BC. This era is associated with the first permanent settlements and the rise of agriculture: the ‘Neolithic Revolution’. Because of the major interest shown in the Early Neolithic and its accompanying Great Leap Forwards, little investigation has been carried out into the subsequent Late Neolithic, c. 6800–5800 BC. Although the Late Neolithic is recognized as an era of momentous socio-economic change and innovation, the period is still listed among the least known in the Near East (Campbell 1992; Akkermans 1993; Akkermans & Schwartz 2003). Due to the paucity of substantial data sets until recently, serious deficiencies in our understanding of the Late Neolithic communities occur at virtually every level of investigation, and interpretation often barely exceeds the level of sheer speculation.

This picture is changing because of the burgeoning research into the Late Neolithic in our days. In this respect the current Dutch excavations at the site of Tell Sabi Abyad in the Balikh region of northern Syria are of considerable importance. Specifically aimed at the investigation of the Late Neolithic, the extensive exposures have revealed a unique, continuous sequence of seventh and early sixth millennium occupation layers, unparallelled at any other site in Syria (Akkermans et al. 2006). The wholly new data from Tell Sabi Abyad outdates earlier insights into the Late Neolithic and necessitates the revision of previous concepts of material and social development in this period

Of the utmost significance is the proof at Tell Sabi Abyad for substantial cultural change around 6200 BC. There is strong evidence for a fundamental, rapid transformation of society at this time, in the form of re-arrangements and innovations in the pattern of settlement, architecture, material culture, economy, burial practices and social organization. The many adaptations indicate that a major shift took place from a primarily sedentary, agrarian lifestyle to a more differentiated, pastoral form of existence around a number of central sites. This moment of distinct change has gone unnoticed in Near Eastern archaeology, because of the lack of insight into the appropriate chronology and the relevant strata of settlement which existed until recently.

The applicants link the radical cultural transformation at about 6200 BC to the prominent, abrupt climate change in the northern hemisphere around this time – the so-called “8.2k calBP climate event” (Alley et al. 1997; Von Grafenstein et al. 1998; Alley & Ágústsdóttir 2005; Rohling & Pällke 2005). The climate event brought generally cold and dry conditions, lasting about 300-400 years (“Mini Ice Age”; Clark et al. 2003; Fagan 2004). Whereas palaeoclimatology has provided evidence for natural changes that were much bigger than typical climate variability before and after the event, the archaeological and cultural implications have not yet been studied. We hypothesize that people deliberately set into motion a range of changes and innovations in order to mitigate the environmental effects of the climate shift. Once the change was made, it involved many other innovations that were probably not anticipated in the beginning but that appear to have been crucial in the subsequent shaping of complex society at the end of the seventh millennium.

The programme intends to investigate the relationship between the abrupt climate change at about 6200 BC and the many material, technological, economical, social and ecological changes and innovations in Syria at this time (as they are reflected in the archaeological record). Elaborating on the exceptional results of the excavations at Tell Sabi Abyad, the programme has three closely related aims:

1. Research into the effects of the substantial, abrupt climate change on the local prehistoric societies

The multidisciplinary nature of the programme is emphasized by specific research into the relationships between the important changes in the organization of society at about 6200 BC and the simultaneous climate change. The proposed investigation bypasses environmental determinism, climate as a deus ex machina, or simple collapse theories. We focus on the timing and intensity of the climate shift, and particularly on the material, economic and social consequences for the prehistoric communities in the long and short run (Van Buren 2001). This implies issues such as social stress, societal vulnerability, competition, mobility, changes in the significance of the material culture, and social differentiation and transformation. The inventiveness of people in manipulating the environment in the seventh millennium can be observed in a kaleidoscope of material expressions and in a mosaic of ever-increasing regional and cultural diversity.

2. Interpretation of the many cultural changes in the Late Neolithic from a long-term perspective and based on new data

Investigating the cultural effects of the climate change obviously requires a detailed insight into the development of society before and after the climate event. This insight is currently provided by the extensive excavations at Tell Sabi Abyad. The excavations demonstrate not only the archaeological correlates and cultural implications of the climate change, but they also unravel the long trajectory of the seventh-millennium cultural development that preceded the transformation. So far, Tell Sabi Abyad is the only site where the strata of occupation relevant to the proposed study have been unearthed on a large scale. The wealth of burgeoning new information allows a diachronic study of local Late Neolithic society, with a focus on both short-term and long-term changes in settlement, material culture, socio-economic organization, and environment. An integral study of both the new data and the review of the conceptual framework (see below) will lead to new interpretations of the nature and organization of Late Neolithic society.

3. A critical re-evaluation of the concepts and data underlying the generally accepted interpretation of the Late Neolithic that has prevailed up to the present 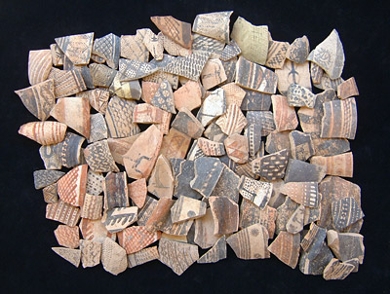 The archaeological conceptualization of the Late Neolithic Near East took shape largely between 1920 and 1960. According to the then current culture-historical principle, a distinction was made between a number of different ‘cultures’, replacing one another in the course of time, generally because of often presumed coherences and changes in the material culture (Jones 1997). Although modern development of theories has not gone unnoticed in Near Eastern archaeology, the concepts formulated at the time are still steering research even today. Generally the Early Neolithic period is imagined to be one of previously unknown innovation and progress, while the Late Neolithic is burdened with a series of negative associations, such as collapse, abandonment and social regression.

This conventional concept has a number of important shortcomings, such as:

The above, combined with considerable new archaeological data and insights, forces us to revaluate the existing framework of concepts and interpretations, and also to criticize the historical context within which this framework took shape.

The research programme employs an explicitly multidisciplinary approach, and includes contributions from the fields of archaeology, botany, zoology and the natural sciences (isotope analyses, palaeoclimatology). It builds on the outcome of a wide range of earlier work at Tell Sabi Abyad, including several Ph.D theses (Akkermans 1993; Verhoeven 1999; Cavallo 2000; Jackson 2002; Nieuwenhuyse 2005). Integrating both previous and new research will provide a comprehensive insight into cultural development in Late Neolithic Syria. Although the climate change is central in answering to the research objectives, we emphasize that the research programme will take other, competing, explanatory frameworks fully into consideration as well. 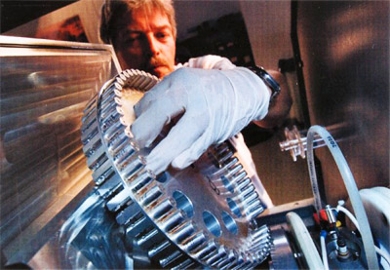 The research objectives mentioned above will be approached by using several, mutually complementary, data sets. The objectives will be comprehensively investigated from the perspective of settlement and architecture, material culture, animal husbandry, the use of plants, and natural isotopes. Each subproject is roughly similar in design and comprises:

Isotope analyses constitute an important component of the research programme. Detailed insight into chronology forms the backbone of the project. Therefore, an extensive programme of 14C analyses will be performed at the Groningen Centre for Isotope Research. Isotope analyses also constitute the basis of several studies concerning the tracing of data in animal bone and botanical remains relative to palaeoclimate, dietary change and migrations (subproject 5).

While the outcome of previous fieldwork in Syria provides the basis of the programme, two additional campaigns of excavation at Tell Sabi Abyad are planned (2006-2007) to both expand and check the available data bases. This serves to secure the reliability of both the foundations and, ultimately, the conclusions of the programme. 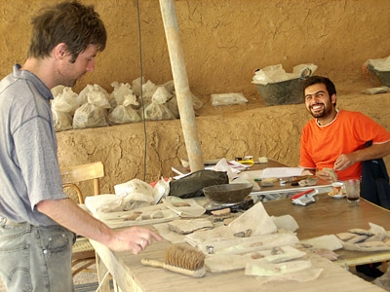 As to relevant research themes not covered by the programme itself, we seek the collaboration of institutes and specialists both in the Netherlands and abroad. This collaboration has been established in the fields of archaeometry, bitumen analysis, residue analysis, climate modelling, isotope analysis, and palynology (Universities of Leiden, Amsterdam, Groningen, Frankfurt, Bristol, Bordeaux and Strasbourg.

In order to enhance the international character and context of the research programme, the applicant also proposes an international symposium to be organized at Leiden University in 2009 ( Investigating the Late Neolithic of the Near East: New Perspectives and Recent Research). The symposium has not been organized before and fills a need for dialogue among Near Eastern archaeologists.