For present purposes, it is important to distinguish between an early period of settlement, about 6800-6200 BC, and a late period, about 6200-5800 BC, at Tell Sabi Abyad.

We are reasonably well-informed on the development of settlement and architecture in the late period, because of several previous Ph.D research projects and other work (see above). In contrast, very little is still known on the nature of settlement in the early period, c. 6800-6200 BC. The results of the recent excavations at Tell Sabi Abyad, specifically focussed on the early period, offer a unique opportunity to investigate in detail this poorly known stage of the Late Neolithic. This project consists of four related parts: 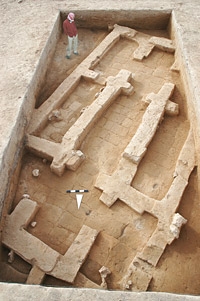 This is a comprehensive, pioneering assessment of the nature of settlement at Tell Sabi Abyad in the early period, 6800-6200 BC. It includes the detailed analysis of individual buildings and building techniques, and their relationship to neighbouring structures and the settlement as a whole. Stratigraphic and depositional data serve to reconstruct duration and (dis)continuity of habitation, episodical contraction and expansion of occupation, and changes and innovations in the architecture and its spatial organization through time. A contextual analysis of installations (hearths, storage bins, etc.) and finds in the buildings may provide indications for the use and function of buildings and the rooms therein. A particular emphasis will be on what has been termed the ‘cultural biography’ of buildings (Gerritsen 2003) and its implications for the reconstruction of social contexts in which architecture prevails (see also e.g. Kent, ed., 1990; Parker-Pearson & Richards 1994; Verhoeven 1999 on approaches to architecture and social meaning). Essential, too, is the study of households and their role in the Late Neolithic community (cf. Blanton 1994; Allison, ed., 1999; Kuijt 2000).

This part comprises an integration of the newly obtained results on the early period with previous work on the late period. This comparative approach will offer an insight into the continuities and changes in community organization from the long-term perspective. It will also provide opportunities to evaluate the nature and degree of impact of the climate change c. 6200 BC. Current knowledge assumes many innovations in settlement and architecture at this time, including the appearance of circular structures and public architecture in the form of extensive, communal, storehouses combined with an increasingly mobile population. Do these renewals simply reflect alteration in the longue durée or do they represent an adaptation to changing environmental conditions c. 6200 BC? And if so, what were the social and economic implications? 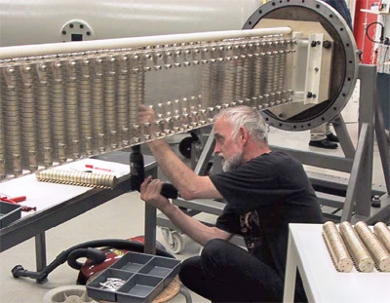 Precise chronological control is at the very heart of interpretation, and essential to the proposed research in general and the study of the development of settlement in particular. In association with the stratigraphic sequence, it serves to exactly pinpoint the observed patterns of community organization and the temporal variations in them, as well as to define the timing and pace of the many changes and innovations. Moreover, high-resolution dating is vital to the assessment of synchronism between the climate change and the associated cultural transformation at about 6200 BC (particularly in the light of the abrupt occurrence of both events). In this respect, high precision in dating implies archaeological narrative and objective description, rather than a concentration on ideas and assumptions (Gowlett 2004). The currently existing chronological frameworks do not meet our aims, as they are based on small numbers of 14C dates with often considerable probabilistic errors. Therefore, the project entails an extensive programme of 14C dating, aimed at the highest possible precision and including the analysis of many dozens of organic samples at the Groningen Centre for Isotope Research.

The planned 14C programme will make Tell Sabi Abyad one of the best-dated Late Neolithic sites in the Near East, with enormous potential for comparative purposes. The new chronology will enable the researcher to re-evaluate and re-interpret the outcome of other relevant excavations in Syria and southeastern Anatolia that are still poorly dated.