Corinne Hofman, Leiden Professor of the Archaeology of the Caribbean Region has been awarded the 2013 KNAW Merian Prize for women in science. Her aim with her research is to broaden the history of the colonisation of the Americas to include the perspective of the indigenous Indian population. 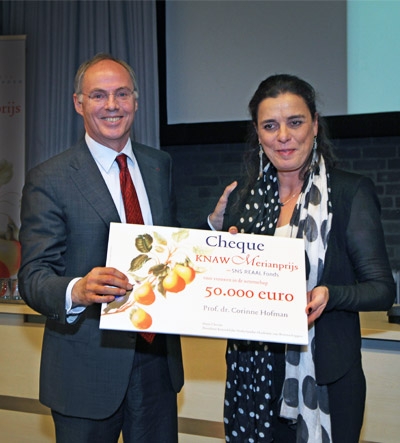 Under Hofman’s leadership, the Caribbean Research Group has developed into the world’s largest and most successful research group in this field. Hofman was recently (September 2013) appointed Dean of Leiden’s Faculty of Archaeology.

The KNAW Merian Prize, sponsored by SNS REAAL Fonds, is awarded every two years to an excellent female scientist who is able to inspire others to take up a career in science. The prize is awarded alternately to a researcher in the arts or humanities and the sciences.

‘The way in which Hofman has developed her own specialist field and has raised it to a prominent place on the academic map is an impressive performance,’ the jury wrote. ‘Her authoritative and innovative academic work makes her an inspiring role model. In addition, she actively encourages talented female researchers to take up a career in academia.’

Hofman’s research demonstrates clearly that the Caribbean area had its own history thousands of years before the arrival of Columbus. This history lacks written sources and can only be reconstructed on the basis of archaeological finds. Hofman started her excavations in the 1980s on Saba, but, having discovered that a network existed between the different islands and parts of the mainland where people moved about and goods and ideas were exchanged, she has since carried out fieldwork across almost the whole Caribbean region. She collaborates with research groups from many different disciplines, working on such themes as isotope and DNA analysis, network theory, history and ethnography.

Self-awareness of the local Caribbean population

Hofman also recently received a subsidy from the NWO Open Competition, an ESF HERA subsidy and the prestigious ERC Synergy Grant. These subsidies will allow her to co-operate with three other research groups in the Netherlands, Germany and Belgium in setting up a large-scale multidisciplinary research project on the first cultural meetings between the Western colonisers and the New World, viewed from the perspective of the indigenous Indian population. Hofman wants to use her research to contribute to the self-awareness of the present-day inhabitants of the Caribbean area and their understanding of the history of the region. With this in mind, she regularly invites local school classes to the excavation sites.

The KNAW Merian Prize consists of a monetary award of 50,000 euros and a specially designed article of jewellery. Corinne Hofman intends to use the full amount of the prize to give promising young female researchers the opportunity to study for a PhD within her project.
(19 September 2013 - KNAW)