Leiden and Beijing in philosophical dialogue

Between January 11th and 14th the Institute for Philosophy of Leiden hosted the second edition of the Beijing-Leiden Conference in Philosophy, devoted to the topic “Emotions in Comparative Perspective.”

The cross-cultural symposium was organized by Frans de Haas and Stephen Harris, both lecturers at Leiden University, with the participation of other professors from the Department of Philosophy such as Ahab Bdaiwi, Bruno Verbeek, and James McAllister. Beside the ‘local’ academic staff, several Beijing-based scholars took part to the conference: Liu Xiaoting (Beijing Normal University), Guo Jing (Beijing University of Chemical Technology), Zhang Xiuhua (China University of Political Science and Law), Wang Tianmin (School of Marxism Beijing Normal University), together with other professors. 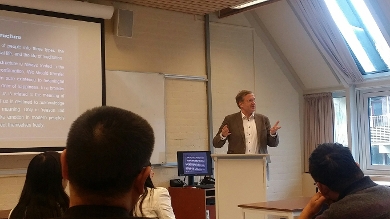 The lectures offered by the participants created a comparative dialogue between different philosophical traditions, which was constructed by addressing to a shared topic: the role of emotions. Some of the themes explored during the symposium included: the role of emotion in knowledge and justification; the relation between emotion and virtue; the normative value of emotional response; the ontology of emotion; and emotion within aesthetic theory.

Since the conference aimed to offer a comparative perspective, a further point of discussion questioned whether and to what extent the English term ‘emotion’ adequately grasps the psychological distinctions made in other philosophical traditions, such as Buddhism and Confucianism. Considering the positive outcomes of the conference, a third edition will indeed be in the agenda of the Institute for Philosophy.

The next edition might include an extended collaboration between several universities from both the Netherlands and China, especially considering two important events related to the field of comparative philosophy, taking place in the two countries. First, the start of the new Leiden BA programme Philosophy: Global and Comparative Perspectives in September 2017, that features Western philosophy as well as philosophies from India, East Asia, and the Arab world, and which will be the main stage of studies in comparative philosophy in the Netherlands.

Second, the 24th World Congress of Philosophy devoted to the topic “Learning to be Human”, that will be hosted by Peking University in Beijing during August 2018. Considering this scenario, next year’s edition is expected to be even more lively and global. Do not miss it, and stay tuned!