Elise Kortink, student of the Master in Psychology (research) won the award for the best LUF-grant application of 2016 with her research proposal for an internship at the Yale Child Study Center (YCSC).

The jury praised her proposal as the best and most creative. Elise will spend the 2250 euro award on a follow-up study. 'Together with my supervisors, dr. Melle van der Molen and dr. Michael Crowley, I am planning to continue the line of research I started.'

Her LUF-grant allowed Elise Kortink to do an internship in dr. Crowley’s Developmental Electrophysiology Lab at the YCSC from March to August 2016. She developed a new research protocol to measure children’s patterns of brain activity (EEG) during social rejection. With an interview she assessed whether the children showed secure, anxious or avoidant attachment to their parents. The goal of her project was to investigate whether neural measures of attachment styles can predict which children are at risk of developing psychological problems later in life. 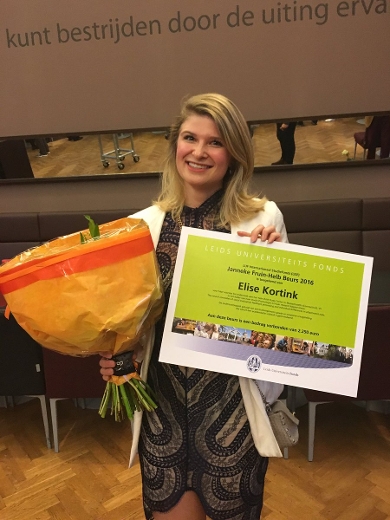