Researched to the bone

Symposium on the extraordinary excavations at Middenbeemster 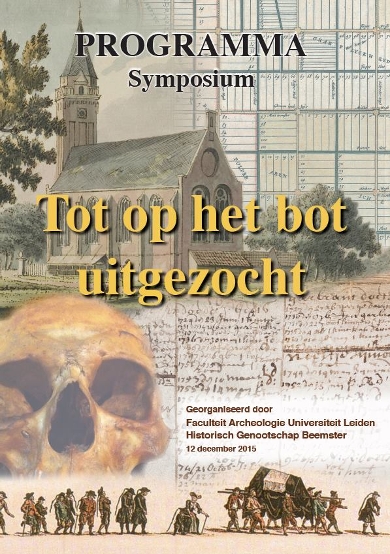 The symposium ‘Tot op het bot uitgezocht’ (‘Researched to the bone’) was a collaboration between Laboratory for Human Osteoarchaeology and the Historic Society Beemster ( Historisch Genootschap Beemster). In 2011 the Laboratory for Human Osteoarchaeology was asked to excavate a (mostly) 19th century cemetery, located next to the church of Middenbeemster (Netherlands). This was done in cooperation with the archaeology company Hollandia Archeologen.

This was an extraordinary excavation. Not only were almost 500 individuals excavated, but with the valuable help of the Historic Society Beemster a great deal of archival data became available on some of these persons, such as name, age at death, occupation, marriage, children, etc. The remains were analyzed by students and staff of our lab and now, four years later, it was time to show the community of the Beemster the first results of this ongoing research. About 140 people, mostly from the Beemster area itself, attended the symposium at the Keyser church in Middenbeemster.

The symposium focused on the excavation and the archival research in the morning and on the osteoarchaeological research in the afternoon. Archaeologists Pieter Floore and Sander Hakvoort spoke about the excavation, why it was done, and the different finds like coffin lids and ornate handles. Kees de Groot, chairman of the Historic Society, talked about the reconstruction of the burial history of the cemetery and Klaas Visser, a Beemsterling himself, spoke about his efforts to research his own family tree. 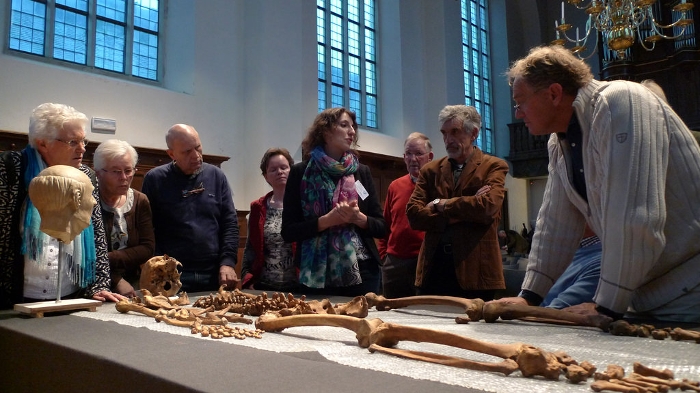 After a well-deserved lunch featuring the world-famous ‘Beemster kaas’ (cheese), the afternoon started with a talk by Dr. Andrea Waters on the most curious cases found in the graveyard, such as a women with dwarfism who had seven children, and a women with very early dental prosthetics. The afternoon continued with PhD candidate Barbara Veselka and her research on vitamin D deficiency, PhD candidate Jessica Palmer on musculoskeletal markers to reconstruct activity, and Dr. Sarah Inskip on her research with Liam Zachary on tobacco, health and disease. The final talk was given by MSc students Abel Bosman and Willem Baetsen and Dr. Hayley Mickleburgh on their research using 3D scans and finally, the facial reconstruction of Dirk Olij, a prominent member of the Beemster community in the 19th century.

The day ended with a workshop on basic human osteology given by Research Master (RMSc) students Christine Erkelens and Anne-Marijn Snaaijer, and the aforementioned Abel and Willem. Several of the pathological skeletons were also laid out for the symposium guests to see, with explanations from our staff on the different diseases visible. Frank van Spelde is thanked for being our photographer and videographer for the day. Esther de Kok-‘t Gilde is thanked for a great job organizing things for the lab. The symposium generated a tremendous amount of interest and a unique occasion for interaction between scholars and the society from which this skeletal collection stems. Therefore, we would like to extend our greatest thanks to the Historisch Genootschap Beemster for organizing this symposium with such dedication and attention to detail, especially Kees de Groot and Vincent Falger, the organizing committee of the symposium, the archival research group and chair of the day Ger Ernsting.