In the summer of 2011, from June 14th until August 5th, the Laboratory for Human Osteoarchaeology conducted an excavation on the former cemetery of Middenbeemster in cooperation with archaeological company Hollandia. The cemetery, which is located next to the church of Middenbeemster can be dated between 1617 and 1866, although, according to historical documents and archaeological information, the majority of the excavated graves most likely date to the late 18th and 19th century. The excavation was necessary because of planned construction works next to the church. Based on preliminary research by Hollandia Archeologen, a total of 250 individuals were expected to be encountered in de designated plot. with six weeks to research en recover the human remains. Due to unforeseen conditions, the total amount of excavated individuals surpassed 500, excavated in only eight weeks. At the moment, 200 of them are still housed in Middenbeemster, the remaining 300 are housed in the Faculty of Archaeology in Leiden waiting to be sampled for DNA and cleaned, prior to their osteological analysis.

The Beemster, a so called ‘polder’, was a former lake which was reclaimed between 1609 and 1613. The polder was set up in a rectangular grid pattern with equal plots. Because of its formerly unknown and unique design, it was appointed as a World Heritage site by UNESCO in 1999. Five churches were planned to be built in de Beemster polder, but the one in Middenbeemster is the only that has actually been realized. It was designed by Hendrick de Keyser and was finished in 1623, making it the oldest building in the Beemster. The town of Middenbeemster is right at the centre of the polder (Midden- is translated as ‘middle’) and all inhabitants of the Beemster were buried at the Middenbeemster cemetery. Furthermore, the people who were born in Middenbeemster but but moved to other towns were also interred in the cemetery. The cemetery was in use from the beginning of the 17th century onwards. From 1638 people were also buried inside the church until the ban on indoor burials in 1829. The cemetery was in use until 1866, when the new cemetery on the periphery of Middenbeemster was taken into use which is still in use today (where also a part of the excavated skeletons is housed and cleaned). 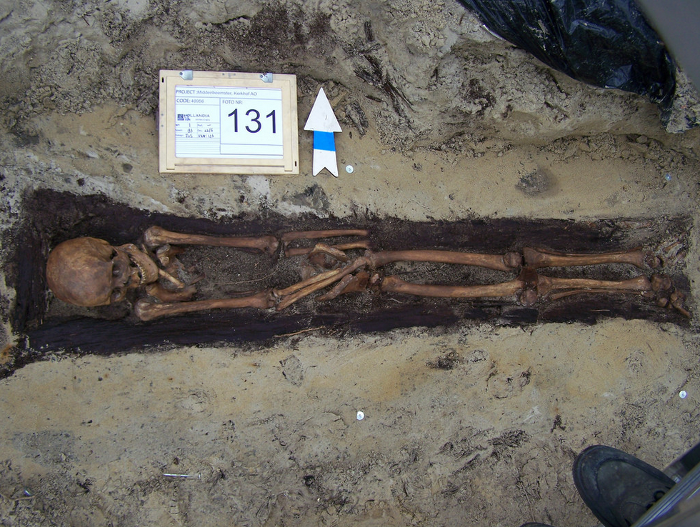 Just as the carefully planned Beemster polder, the cemetery was also set up in a regular grid pattern in which every plot had a number. A map of the cemetery documenting all the names of the persons buried in each plot from 1829 and later has survived. Everyone was buried in wooden coffins, some of which had iron or brass handles or lettering made of copper nails on the lid. Most burials were found in the two meter thick layer of sand which was brought up from somewhere else probably at the beginning of the 19th century. Underneath was a layer of clay, also brought up but probably a lot earlier, possibly in the 17th century. The presence of a few large bone pits suggests that when a burial plot was full, the bones were excavated and reburied in an empty space on the cemetery, a practice very common in that time (and still today).

In most cases in archaeology, the excavation is just the starting point of the whole research, and the analysis of the found material usually takes several months or even years. Especially extensive osteological research is very time consuming and the analysis of all the individuals from Middenbeemster will take a few years. At the end of the osteological research, we will have a good indication of the overall health of the Middenbeemster population, along with information about life expectancy, biological ancestry, possible provenance and other demographic data which we can use for many further research topics (e.g. a comparison between an urban community and the rural community of Middenbeemster, or indicative markers of rural life in the skeletal assemblage). The possibilities, especially in combination with historical documents are almost endless… 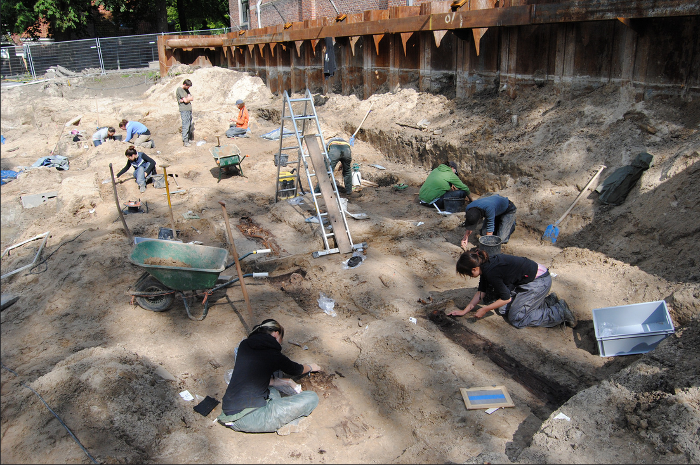 More pictures of the Middenbeemster Excavation