Professor Johan Rooryck will be examining cognition and core knowledge systems and how possession is expressed in different languages. Rooryck and fellow researchers have been awarded two NWO grants totalling 2.75 million euro to carry out two research programmes: 'Knowledge and Culture' and 'Lend me your ears'. 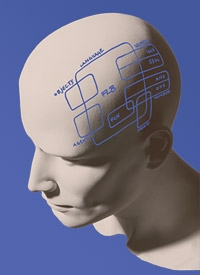 What makes humans unique
The Knowledge and Culture project attempts to determine what makes the human species unique, and what humans share with animals. It seeks to separate out the fixed, biological basis of culture from those factors that allow for cultural variation.

‘Humans and animals are born with core knowledge systems: a small set of hard-wired cognitive abilities that are task-specific, language-independent, and non-species-specific,’ Rooryck explains. ‘We know this from research carried out in various domains of cognitive science – psychology, mathematics, cognitive neuroscience, linguistics, music cognition, and biology. It is these innate cognitive skills that enable us to build mental representations of objects, people, spatial relationships, numerical knowledge, and social interaction.’ In addition to these core knowledge systems, humans also possess species-specific, uniquely human, cognitive abilities such as language and musicality.

Nature or nurture
The ‘core knowledge’ model challenges scholars in the humanities to question which parts of culture are part of nature, and how nurture and culture build on nature. Rooryck’s project will examine the ways in which cultural expressions in music, language and the visual arts are constrained by innate, non specifically human core knowledge systems for object representation, number, and spatial relationships. The researchers will also address the question of how these core knowledge systems interact with human-specific systems such as language and musicality.

'Lend me your ears'

'What's yours and what's mine'
Possession is a fundamental concept of human culture. Rooryck explains: ‘The boundary between what's yours and what's mine may differ from culture to culture, and from individual to individual. Nevertheless, some things can only be yours or mine, for instance body parts or family members. Human language reflects this basic distinction between things that are intrinsically yours and things that are not.’ In fact, most human languages make a grammatical distinction between transferable entities such as your car, my watch, or Mary’s money and untransferable entities such as body parts (my hand, your leg, her finger) and kinship relations (my sister, John’s grandfather). The fact that this basic distinction occurs in many genetically unrelated languages suggests that it is an inherent part of the human language faculty.

A hotly debated issue
Rooryck’s main aim with this project is to investigate the various ways in which language categorizes possession, how words are structured in different languages to indicate ownership, and how this distinction should be represented in a model of the language faculty. Another goal of this project, with a view to its societal relevance, is to enter a dialogue with neighbouring disciplines such as philosophy, psychology or bioethics, where the possession of one’s body parts is a hotly debated issue.

Global Interaction of Civilizations and Languages is one of the six themes for research at Leiden University.