docARTES is a doctoral programme for performers and composers. It offers a unique environment for critical reflection on musical practice.

The ingenious designs of Leonardo da Vinci, the influence of mathematics on the compositions of Bach and Stockhausen, the aesthetic conceptual frameworks of Expressionism - all these are outstanding examples of research in the creative or performing arts, of synergy between art and science. In their research, artists can create remarkable links between different disciplines. The research they do is possible only because they are artists. Conversely, they develop their artistry through their research. Their work is invaluable to our information society, which is partly sustained by art.

We all know that art and music historians do research on the creative and performing arts. Research in the arts, however, has never been promoted by Flemish or Dutch art schools or universities. For centuries, students have been receiving PhDs in literature, religion or philosophy. But not in the creative or performing arts. DocARTES offers an international inter-university doctoral programme for practice-based research in musical arts. The docARTES curriculum is run at Orpheus Institute in Ghent, together with Flemish and Dutch partner institutes since January 2004.

Artists that receive doctorates in the creative and performing arts earn their titles through a combination of artistic achievement and theoretical reflection. They must produce artistic work of the highest level, including concerts, performances, master classes or other events. Their research findings must be reported in their thesis, which they defend in public.

More than just stimulating and facilitating artist-researchers, docARTES provides a 4-year doctoral curriculum, consisting of research and training. It allows doctoral students to develop their artistic qualities, broaden their academic knowledge and expand their methodological skills. This curriculum is supplemented by individual research supervision. docARTES is also integrated in a professional artistic research biotope, preparing doctoral fellows for a professional career as artistic researcher.

The docARTES curriculum is run at Orpheus Institute in Ghent, together with Flemish and Dutch partner institutes since January 2004. 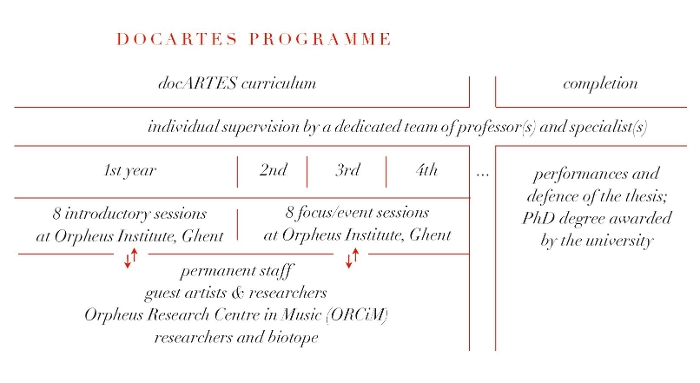