This project investigates the well-preserved agricultural terraces of the Inn valley and the evolution of resource use in the inner Alps.

Archaeological Service of the Canton of Grisons, Chur

Recent archaeological and palaeoecological research into the evolution of alpine pastoralism in the Silvretta mountains (Switzerland/Austria) has shown that this highly adapted system of resource use was already in place during the Bronze Age, and probably originated during the Late Neolithic. The origins of agriculture in the surrounding valleys are less well known.

In this interdisciplinary project we investigate the well preserved agricultural terraces of Ramosch, Lower Engadine, Switzerland, and their possible connection to palaeoclimatic changes. While historical sources allow to trace their use to medieval times, when the modern settlement of Ramosch was founded, previous geoarchaeological as well as palaeoecological studies indicate that the terraces on the upper reaches of the northern slope of the Inn valley are much older. This is in line with archaeological evidence of Bronze Age and Iron Age settlements and fortified sites at the same altitude. Building on this earlier research, and starting from the assumption that pastoralism and agriculture were complementary aspects of a vertical system of resource use, our project aims to identify early human impact on the landscape, and to reconstruct the emergence and evolution of the terraces triggered by cultural or climatic changes. We also focus on geomorphological properties of terraced sites, such as aspect, slope and soil characteristics, to explain the spatial pattern of terraces.

The first field season in 2015 targeted the surroundings of the Bronze and Iron Age hilltop sites of Motta and Mottata, near Ramosch, in order to explore the natural resources available in that area, and the preserved traces of their use. The employed methods include regional 3D mapping based on remotely sensed data, archaeological and geophysical survey, soil and sediment analysis, stratigraphic excavations, chronometric dating, and oral history. 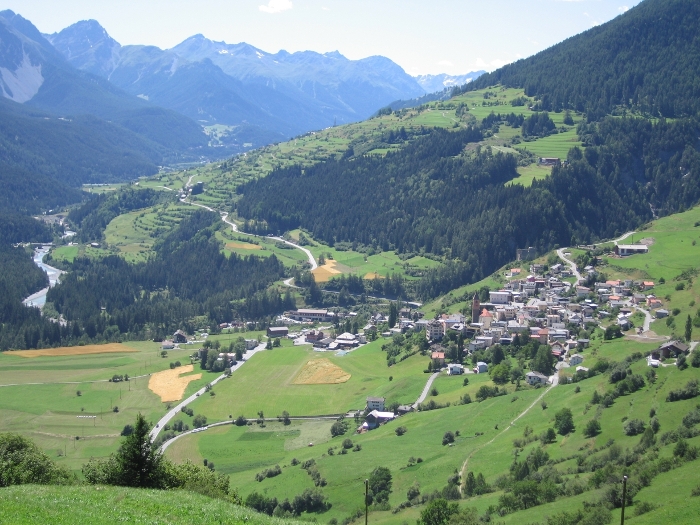