Weightless in the name of science

Laura Nijkamp’s biggest dream came true recently: she took a parabolic flight and was weightless for a moment. The BrainFly student team, which includes psychology students from Leiden, needed volunteers. She signed up immediately. She tells us all about her experience.

‘We’re going on a parabolic flight – and you can go too.’ I read this on Twitter a few months ago. Years’ ago, I saw footage of a parabolic flight on TV. The plane flies up and down so fast that you experience weightlessness. I knew straight away that was what I wanted to do. Hands shaking, I mailed them immediately and joined the programme. Many questionnaires, Skype meetings and a medical later, I was told I could start training. And my lovely employer gave me the freedom to make my dream come true.

What is the BrainFly project? Four students (Danielle, Evelien, Rebecca and Anouck) are carrying out this project within the European Space Agency’s (ESA) Fly Your Thesis! programme. The focus of the project is using your brain rather than your hands to perform certain tasks. An EEG cap (EEG stands for electroencephalography) on your head measures your brain activity. The results of this research are of interest to ESA, because it could be useful for astronauts to use their brains alongside their hands to do complex repairs, for instance. More on this later!

I travelled to Nijmegen twice in October and November to learn how to perform tasks with my brain rather than my hands. It’s magical to see an object move back and forth on the screen, simply by imagining that you are moving it. Eat your heart out Uri Geller! And now, after months of training, the adventure starts on 3 December 2017: we’re flying to Bordeaux!

4 December 2017 – First briefing and a look round the plane

It’s Monday 4 December and today we’re at the NoveSpace field in Bordeaux to prepare for the flights. The BrainFly girls having been working hard on this last week too. We participants now need to do a few last things. The whole group is together today and although we hardly know each other the atmosphere is fantastic. We’re all aware of how special this week is going to be and how this really is a once-in-a-lifetime experience. Over the next few days, we’ll be taking parabolic flights in teams of three.

We left for the NoveSpace field early this morning. It’s the only place in Europe where they make such flights with the Airbus 310.  We need to fill in the last bit of paperwork giving our informed consent and are given a last medical (and the women must do a pregnancy test, because you’re not allowed to take part if you’re pregnant) and a briefing. When we arrive at the field, the sun’s shining and the plane where it’s all going to happen is standing ready. It really is about to happen. I can’t believe I’m standing here!

Then we get to look inside the plane for the first time. The biggest section of the plane is free of chairs and has a white slightly bouncy floor. This is where they’ll do the experiments. It’s also a free-floating area where, as the name suggests, you float during the microgravity phase of the flight. We practise installing all the things that we’ll need for the experiments during the flight. And we get the chance to have a quick look round the plane to see which other experiments are going to be carried out.

5 December 2017 – What are they researching and what will we do during the flight?

The students are researching whether a brain computer interface (BCI) can be used in microgravity. A BCI could help astronauts perform their work more accurately or to multitask, or it could mean they could sit safely in the rocket and use their brain to control a machine outside. The students will also look at how brain signals change in different forms of gravity. This is important for the health of astronauts, but also to make it easier to control a BCI.

To measure this, we will play a game during the parabolic flight: Shoot the Alien. You use brain signals to move a cannon left and right. The cannon shoots automatically and it’s your job to shoot the aliens that come down. An EEG cap is used to measure your brain signals. Just to be clear: nothing goes into the skull – luckily. The cap sits on your head, like a swimming cap.

Why do they want to research this during a parabolic flight? It’s so they can study the effect of the different types of gravity. The only other way to do this is to go up into space. That could be the next step. Fly me to the moon ladies, should you need volunteers again! 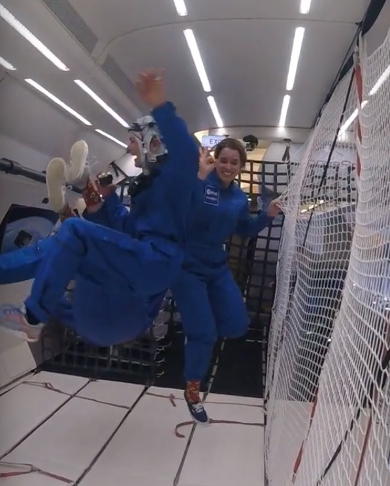 Today and yesterday the first two teams, three people in each, went up into the air. For me there’s little to do, but I enjoy myself anyway. I enjoy every minute that I can spend at this unique place. How many people can say they’ve been here? I talk to other people who are doing research and find it hugely inspiring to see and hear what they’re up to. There’s a positive energy in the air and it’s contagious. I walk round with a big grin on my face all day and am immensely grateful for this opportunity.

At the end of the day, I collect my space suit, because tomorrow is the big day when I get to take a parabolic flight. My biggest dream is finally coming true!

My turn today. My roommate and I play ‘Eye of the Tiger,’ and I can’t eat more than two dry crackers for breakfast. Parabolic flights are nicknamed the vomit comet for a reason: the switch between normal gravity, hypergravity and microgravity gives your body a thorough shaking. You’re given anti-nausea medication beforehand to make sure you don’t vomit.

Just before we fly, the sun rises. I step outside to take photos and my eyes fill with tears. What a beautiful start to the day! I can hardly believe that I’m about to board the plane in front of me. Some people dream of going on a parabolic flight, but never get the chance. I’ve been given this opportunity and want to say a huge thank you to the girls from BrainFly. They’re amazing, intelligent, kind-hearted people. Fantastic to have been able to take this trip with them.

We’re off! Our route will take us over the Mediterranean today, because the weather over the Atlantic is bad. The sun’s shining and it promises to be a good flight. After we’ve been flying for a while, we’re given the sign to prepare for the parabolas. We’re given our table and laptop and sit down on the chairs. Handy piece of information: the laptop tables are fastened to our legs with a belt and the laptops are fastened to the tables with Velcro.

In total, we will do 31 parabolas during the flight. We don’t have to do anything during the first one. During the next 25 we have to perform tasks, including the game, and during the last five we can take everything off and float freely. I’m almost flying with all the butterflies in my stomach. I hear the pilot count down. And there we are: my first time weightless! I can’t help grinning and don’t stop for the rest of the flight. The tasks go quite well. My laptop works well and it’s only a few times that the game doesn’t work properly. They take good care of us in the breaks between the parabolas: we’re given food and water, and the doctor goes back and forth checking that we’re still feeling alright.

Once the hard work is done, it’s finally time for a spot of free floating. In one word: wow! I feel intensely happy. Weightlessness means letting go. Down, up, left, right: they don’t mean anything anymore. There’s no point in moving: you can’t move anywhere unless you push against something. I get the opportunity to float completely freely for two parabolas, float partly for two and spend one at the plane window. Here I enjoy the bizarre view as the plane flies up and down almost vertically. Then, after a few hours, it’s over. What an amazing experience! I’m so grateful that I got the chance. And just remember: dreams can come true!

What is a parabolic flight?

With a parabolic flight you can create a condition of weightlessness. This is done by flying the plane in a parabolic trajectory. It ascends and then descends at an angle, creating hypergravity (where you experience almost twice as much gravity than usual) and microgravity (weightlessness).