Adolescents who were more popular among their classmates in junior school are often the ones who are more inclined to share things fairly with others. During this sharing process, 'social' areas of the brain are more strongly activated than in adolescents who are less popular. This is the finding of research by development psychologist Geert-Jan Will, published in Developmental Science on 17 October.

Geert-Jan Will and his colleagues made scans of the brains of 47 adolescents aged from 12 to 15. The popularity of these young people was rated by asking their classmates every year who they liked and who they didn't. By combining the responses from the whole class, a good picture emerged of which pupils were more popular and which were not. During the scans the participants could decide whether children they didn't know should receive money or not. In some cases they could choose whether to share out the money fairly without disadvantaging themselves, and in other cases sharing out the money fairly meant they themselves would receive less money. Adolescents who were liked by their classmates over the course of the study shared money with the other participants more often than the adolescents who were less popular, but only if this was at no cost to themselves. Their behaviour was both social and strategic.

In situations where sharing fairly had costly consequences, the popular adolescents exhibited more brain activity in two brain networks. One of these is important for empathy, and the other is active when a person sees that a norm has been violated, for example when somebody behaves unfairly. The raised activity in these networks may indicate that adolescents paid more attention to the consequences of their choice for the other person than those who were less popular at junior school. 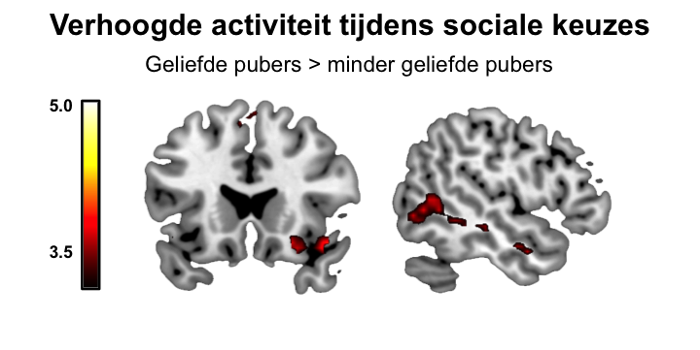 Previous research has already shown that children with well developed social skills are more popular among their contemporaries and have fewer problems at school. The current research by Geert-Jan Will and his colleagues gives insight into the brain processes that may form a link between the development of social skills and popularity among classmates. This research is unable to answer the question of whether these brain processes are the cause or effect of being popular. Further research is needed to gain a better understanding of this question. Such research could take the form of long-term studies where changes in popularity over a longer period are linked to a number of brain scans in different stages of childhood and adolescence.