Complexity and Network Science at the Leiden Networks Day

The first successful Leiden Networks day took place on September 23, 2016. Six world-renowned speakers (see photo) in the field of complexity and network science provided their view on the field.

The first successful Leiden Networks day took place on September 23, 2016. Six world-renowned speakers in the field of complexity and network science gave a broad overview of this field. There were 130 registered visitors with a multitude of backgrounds: computer science, physics, mathematics, medicine, social and behavioural sciences, as well as other areas. This points out the broad interest in complexity and network science within Leiden University and The Netherlands.

Bringing together scientists from different disciplines is the main purpose of the Leiden Complex Networks Network (LCN2), which organized the event. Indeed, a campus-wide, interdisciplinary community of researchers is gradually growing around the topics of complexity and networks science, which require the combined effort of scientists with different backgrounds. LCN2 will continue this initiative with its monthly seminars, as well as with a teaching program, which includes a semester course on complex networks and a honours course on complexity. Moreover, there are plans for organizing an exploratory workshop at the Lorentz Center in Leiden, as well as making the Leiden Networks Day a yearly event. 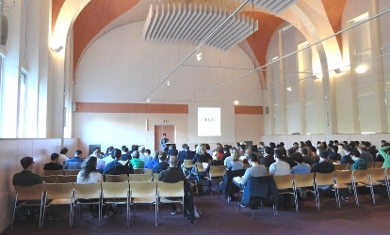