On Monday 30 May 2016, the Assistant High Commissioner for Protection at UNHCR, Mr. Volker Türk, delivered the Keynote Address at the Advanced Course on International Criminal Justice, Migration and Human Trafficking at the Peace Palace in The Hague.

In his speech, Mr. Türk stressed that the increasing scale of movements across international borders combined with recent upsurges of populist and xenophobic political rhetoric and legitimate fears in the wake of recent security incidents, have produced a difficult and increasingly polarized climate to advance refugee protection. He also highlighted that people who flee conflict or persecution are at present often dependent on smugglers, making them susceptible for human trafficking. He stated that responses to smuggling, trafficking, and broader crime-control and security concerns need to be accompanied by measures that provide safer alternatives to those who might otherwise feel compelled to place themselves in the hands of smugglers. He further emphasized that the international community needs to increase international cooperation and responsibility sharing to allow for substantial progress towards an integrated approach to the needs of the forcibly displaced. He expressed his hope for commitments in this regard during the upcoming plenary of the UN General Assembly on the issue of large-scale movements of refugees and migrants in September this year. 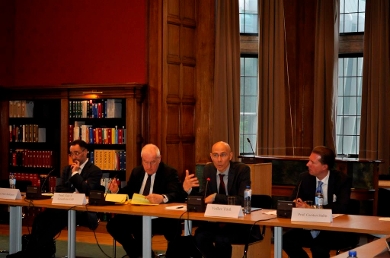 Read the full text of the keynote address here.
Read more about the Advanced Course here.