The way that traditional hunter-gatherers roasted tubers can shed new light on how people prepared food in prehistoric times. Archaeologist Stephanie Schnorr has studied the food preparation culture of the Hadza in Tanzania.

Food is easier to digest when it is cooked than in its raw state, and it is often more nutritious too. There are even theories that man's brain capacity increased strongly during evolution because of the discovery that food could be cooked. But scientists do not really understand how the first humans actually came to heat their food.

To find out more about this, Stephanie Schnorr from the Human Origins Group at the Leiden Faculty of Archaeology focused attention on the hunter-gatherer tribe, the Hadza from Tanzania. These people gather different types of fibre-rich tubers that could be eaten raw or roasted. Schnorr conducted a series of experiments with the tubers. 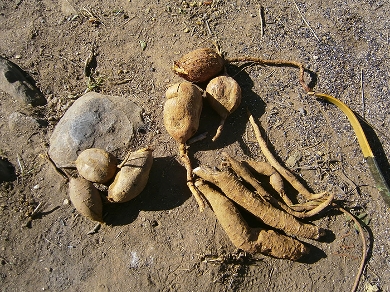 First, she studied what happens to the starch in tubers during roasting, which is how the Hadza cooked them. The granules of starch swell on heating and burst open. This process, known as gelatinisation, makes starch easier for humans to digest. It takes around 20 minutes before most of the starch has gelatinised, Schnorr discovered. 'Roasting for only a short time therefore doesn't give any nutritional benefit.'

Schnorr also simulated the digestion of four types of tubers from the Hadza diet in a lab experiment that imitated the way the intestines work. The tubers are not toxic when raw, Schnorr stressed, so the Hazda by no means always cook them. ‘It is interesting to find out whether the nutritional value of this root vegetable improves following short or longer roasting.' The tubers seem to produce different amounts of energy. When roasted, they produce more energy, according to Schnorr, although the difference is not great. ‘In the real world, the additional calorie content is probably lower than the cost of making a fire.' However, she adds that roasting the tubers does have other advantages, such as making them softer.

Finally, Schnorr analysed the micro-organisms that live in the intestines of the Hadza. Recent research has shown that the composition of these micro-organisms is strongly dependent on people's lifestyle and they can have a major effect on health. In comparison with a group of Western test candidates, the Hadza have more diverse micro-organisms in their digestive system, and also many more of them. Schnorr also found differences between the Hadza men and women. The presence of a number of specific groups of bacteria in their intestines may indicate an adaptation to obtain enough nutritional matter from the fibre-rich turnips, Schnorr believes. This offers some good opportunities for follow-up research on gut bacteria.

Roasting tubers could be a good model for early forms of food preparation, according to Schnorr. 'If this method allows the Hadza to live and flourish on the East African savannah, I think it is safe to assume that early groups of humans, and possibly also early species of the genus Homo, also relied on this method.' But the research does not give an exact reconstruction of prehistoric diets. 'Based on my research, I believe that food preparation was strongly related to such factors as food types, environmental pressures and human behaviour. Each of these factors can be strongly nuanced, and so too should our expectations about the types of food preparation across the spectrum of human existence.'