Close contact between women and dogs in prehistoric times

Close contact between women and dogs in prehistoric times Women and dogs were in close contact in the neolithic age of hunters-fishers-gatherers. This has been suggested by Leiden osteoarchaeologist Dr Andrea Waters-Rist and fellow researchers who have studied a tiny biological fossil. The fossil was found close to the skeleton of a female at the 8000-year-old burial site in Southern Siberia. The researchers' findings have been published in the Journal of Archaeological Science.

The egg-shaped fossil, 2 x 3 cm in size, was found at the Shamanka II cemetary site close to Lake Baikal. Examination has shown that the fossil is a calcified cyst of a tapeworm genus, the Echinococcus granulosus. The woman had been suffering from Echinococcosis, the condition that results from carrying a parasitic cyst of the E. granulosus type that only occurs in dogs, wolves and foxes. There are no previous reports of this condition for this period (or earlier). The worm needs two hosts to complete its lifecycle: a herbivore or human being as the intermediate host and a dog, wolf or fox (carnivore) as the definitive host. 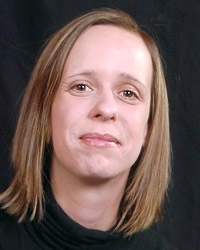 The researchers cautiously suggest that women and dogs may have been in close contact in the neolithic period (a time in pre-history) because the findings - albeit rare - of tapeworm cysts have occurred more ferquently in women than in men; two other parasitic cysts were found in young females at a burial site from the same period as Shamanka II, also in the same region, Lokomotiv. This is striking because males and females are equally susceptible to infection. Even in the present day, statistics show that more women than men are carriers of a tapeworm cyst. Women in the neolithic period must therefore also have been at greater risk of infection. Based on the available knowledge about living conditions in the neolithic period, the researchers believe that women were more often responsible for looking after the animals, including dogs that were kept for hunting or herding reindeer.

From carnivore to herbivore or human, back to carnivore 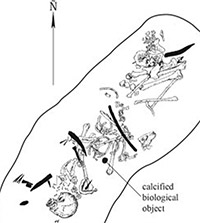 The definitive host in which the tapework lives excretes eggs with its excrement. The eggs can find their way into the digestive tract of the intermediate host. This occurs with herbivores if they eat plants that are contaminated with the excrement of infected carnivores. Humans can also be infected with the eggs by eating contaminated wild fruits and through poor hygiene. The way it works is that an infected dog, for example, can spread the eggs over its whole body through licking. The eggs can then be passed to any person who comes into physical contact with the dog, making that person an intermediary host. The likelihood of the infection passing from the person back to the definitive host - dog, wolf or fox - is not so great. In most cases this exchange is via herbivores, such as sheep or deer, that are hunted by carnivores or whose carcasses the carnivores consume. The carnivore may well ingest a cyst present in the carcass, from which tapeworms will develop. This is how the reproductive cycle comes about.

The passage of the eggs through the human body (and the body of the herbivore) is as follows: the eggs are ingested via the mouth and enter the digestive canal, where they are are converted into another form and then enter the small intestine. Once there, they pass through the intestinal wall and enter the bloodstream. From here they are transported to an organ, most often the liver and the lungs, but possibly also the heart, the bones or the brain. A small bubble is formed in the organ, where the heads of tapeworms develop. This can cause serious illness in humans, or even death. Because of the high calcium content in the bubble, it calcifies in the human body over the course of time, forming a fossil. A lot is known about Echinococcosis because even today there are about one million suffers throughout the world.