In 2005 and 2015 the Leiden University Academy of Creative and Performings Arts awarded two Honorary Doctorates.

Dick Raaijmakers (1 September 1930 – 4 September 2013) was a Dutch composer, theater maker and theorist. He was known as a pioneer in the field of electronic music and tape music. In addition, he realized numerous music theater pieces, art installations, and has published many theoretical essays. In 1966 he founded the electronic music studio at the Royal Conservatoire of the Hague and lectured on electronic and contemporary music until his retirement in 1995. From 1991 he taught music theatre at the Image and Sound Interfaculty at the same conservatory.

In 2005 he received a lifetime achievement award from the Johan Wagenaar Foundation and an honorary doctorate from the University of Leiden.

On February 9 2015 the Leiden University conferred the title of Honorary Doctor upon William Christie. 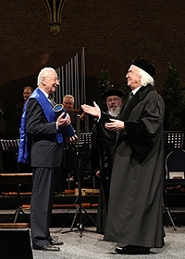 William Christie is a renowned harpsichordist, conductor, musicologist and teacher, and the foremost pioneer in the renewed appreciation of Baroque music in France, notably from the 17th and 18th century. His work, particularly on the theatrical repertoire of Lully, Rameau, Charpentier, Marais and Campra, has introduced this music to previously unimagined audiences, in regularly sold-out venues. Since 2002 he leads an "académie" for young singers, Le Jardin des Voix, and in the eighties and nineties he was the auctorintellectualis and conductor of great music theater productions of works by Lully and Charpentier by the CNSMD's of Paris and Lyon, the Guildhall School in London and the Royal Conservatory in The Hague. He also teaches at the Juilliard School in New York.