The master’s programme in North American Studies at Leiden University takes an integrated, multidisciplinary approach to the study of the United States, with a particular emphasis on examining key aspects of American history, culture, and literature, from a historical perspective and within an international context. 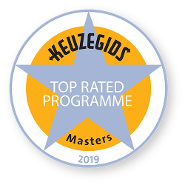 In the Keuzegids 2019, the Leiden North American Studies programme is ranked as one of the top-rated master's programmes in the Netherlands.

According to Elsevier, Leiden has the best MA programme in North American Studies in the Netherlands. Moreover, the Leiden programme has received the label ‘top programme’ in the Keuzegids Masters of March 2019. This ranking is based on the opinion of students (through the National Student Survey) and academic experts (NVAO).

The Leiden programme offers a diverse and international learning environment. While the programme focuses on the U.S., you will also explore the role the U.S. plays in the region and in the world, as well as the impact of the region and the world on developments in the U.S. Some of the key areas and major issues in the history, politics,  literature and culture of the U.S. that the programme explores in depth and from a multidisciplinary and historical perspective include:

An important aspect of the programme is learning how to conduct independent multidisciplinary research, comprehend and apply theoretical insights, learn about and engage with scholarly debates, and take a critical approach to all materials. Critical reflection on U.S. exceptionalism is a recurrent topic throughout the programme.

Learn more about the study programme

During your studies you will learn alongside talented and highly-motivated students in a diverse and international classroom setting. Classes are kept relatively small to allow for a high level of interaction with your instructors, all of whom are internationally acclaimed researchers in the field of American Studies, and to facilitate a research-led learning environment.

Find out more about the career prospects

Do you have questions about studying North American Studies at Leiden University? Contact our study advisors!