Yasco Horsman is a University Lecturer at the Leiden University Centre for the Arts in Society.

Theatres of Justice: Judging Staging and Working Through in Arendt, Brecht and Delbo 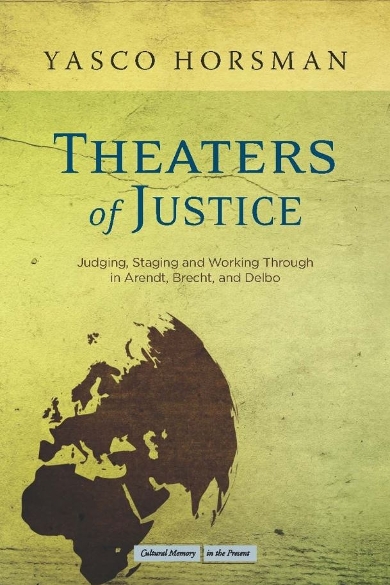 terms with a history of mass violence? How does the theatrical structure of a criminal trial facilitate and limit national processes of healing and learning from the past? This study begins with the widely publicized, historic trials of three Nazi war criminals, Eichmann, Barbie, and Priebke, whose explicit goal was not only to punish, but also to establish an officially sanctioned version of the past. The Truth and Reconciliation commissions in South America and South Africa added a therapeutic goal, acting on the belief that a trial can help bring about a moment of closure.

Horsman challenges this belief by reading works that reflect on the relations among pedagogy, therapy, and legal trials. Philosopher Hannah Arendt, poet Charlotte Delbo, and dramaturg Bertolt Brecht all produced responses to historic trials that reopened the cases those trials sought to close, bringing to center stage aspects that had escaped the confines of their legal frameworks.

Yasco Horsman is University Lecturer of Film and Literary studies at Leiden University. He holds a Ph.D. in comparative literature from Yale University and is author of Theaters of Justice: Judging Staging and Working Through in Arendt, Brecht and Delbo (Stanford University Press, 2010), on the relations between trials, theatre and psychoanalysis. He co-editor of a special issue of Law and Literature on Legal Bodies: Corpus, Persona, Communitas (2016), and has published essays on literature (Kafka, Beckett, Coetzee), cinema (Resnais), Graphic Novels (Spiegelman, Ware, Clowes), Animation (Mickey), drones and flipbooks. He is currently working on a book on Radio and Modernism and collecting notes for a genealogy of the “funny animal” figure in early animation and comic strips.

Together with Pepita Hesselberth, he organizes a monthly series of NICA Lectures at Leiden University called Lectures in Media Art Politics. For more info, see here.

Together with Pepita Hesselberth, I organize a monthly series of NICA Lectures at Leiden University called Lectures in Media Art Politics.