St. Lucia is one of the southern Lesser Antilles or Windward Islands. It is leaf-shaped, narrow in the north and fanning out towards the south. A peninsula juts out in the extreme south. It measures 43 kms from north to south and 22 kms at its widest point from west to east, encompassing a total area of some 600 km². Martinique lies to the north and St. Vincent to the south.

In July 2001, the St. Lucia Archaeological and Historical Society invited Leiden University and the Florida Museum of Natural History to undertake archaeological investigations on St. Lucia. The AHS is one of the oldest archaeological societies in the West indies and they were interested in having new investigations begin before they celebrated their 50th anniversary in 2002. In total three campaigns have been conducted on St. Lucia and more are planned for the coming years. 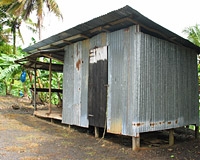 The main purpose of the project was to familiarize the investigators with the archaeology of St. Lucia, and to investigate sites to establish a possible field school. In addition, we used a global positioning system (GPS) to map the sites and to place them in the local and global coordinate systems. Known sites around the island were visited. The archaeological reconnaissance of St. Lucia over the past three years has greatly enhanced the perspectives on Windward Island archaeology. Surveys have been conducted in the southern part of St. Lucia (between Choiseul and Dennery). The database for the island now includes 126 pre-Columbian sites spread around the entire island. The interior of the island in this region is very intensively cultivated and densely vegetated. This hampers the visibility on the surface. In addition, the rolling landscape of this area does not seem to favor habitation. However, it might have been very suitable for horticulture and it would therefore not be surprising if stone tools used for this purpose would occasionally turn up on these plots. 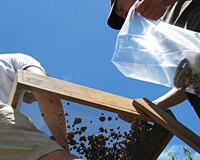 Excavations at Giraudy, Beane Field revealed an extensive undisturbed midden area comprising two components, i.e. one modified or Late Saladoid and one Suazoid. This places the site’s occupation between AD 400 and 1200/1400 AD. Besides large quantities of faunal remains, the site produced a substantial number of pottery, shell, coral, bone and stone artifacts. The 13 test units also produced an interesting view on the geomorphology and stratigraphy of the site. These positive results certainly emphasize the potential of the Giraudy site and one may consider large-scale excavations in the area in the near future possibly involving the establishment of a fieldschool uniting students from St. Lucia, Leiden and Florida. 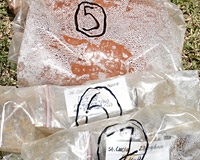 The aim of this project is to link the clay source sites to pre-Columbian pottery found at various sites on St. Lucia through archaeological and geo-chemical analysis. This project is part of a larger program on the provenance and exchange of pre-Columbian clay and lithic materials in the islands of the Lesser Antilles. This project comprises a geological part involving geo-chemical analysis and an archaeological part involving the testing of the workability properties of the clays and fabric analysis. 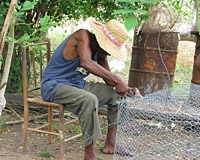 The team created documentary videos of cassava processing, pottery making, and the construction of fish pots. The team also documented the construction of a structure used in processing bananas. A brief description of these activities is provided here. The videos will be edited and copied for distribution in St. Lucia for those interested in preserving knowledge of traditional crafts.

The pre-Columbian site of Lavoutte, has been known as a major Late Ceramic Age (A.D. 1000-1500) settlement since the 1960s but has become increasingly damaged over the past decennia due to both natural and human factors. 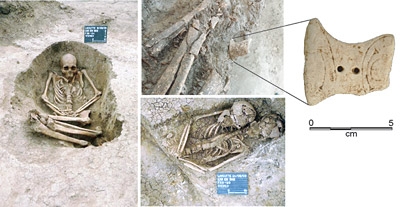 Multi-disciplinary field and laboratory methodologies were implemented in a rescue project at the site in 2009-2010 in order to rescue valuable information on the lifeways and deathways of a Late Ceramic Age Lesser Antillean coastal community. Research demonstrates both the paramount importance of protection and rescue of endangered archaeological sites and the significant scientific value of their study. Fieldwork at Lavoutte is the subject of a forthcoming publication in the Journal of Field Archaeology. See Lavoutte report 2009 below.