Medicines do not follow the one size fits all principle, because genetic differences can influence their efficiency. That is what research by PhD candidate Julia Hillger shows. She defends her PhD dissertation Take it Personal on Thursday 7 December.

Thirty percent of all medicines on the market work via a specific type of receptor on the cells of the patient, the G-protein coupled receptors (GPCR). Genes determine the form of these receptors. 'Such receptors can be compared to a lock and the medicine to a key. When the form of the lock changes, a different key might fit better,’ Hillger explains. Applied to medicine this is also known as personalised or precision medicine.

For GPCRs, the relation between genes and medicines is mostly known from statistical research. To get a better insight, Hillger studied the process in more detail. She measured the response of cells with genetically different receptors, to medicines and related substances. She did this for GPCRs that were targeted by medicine for immune diseases, diabetes, and Parkinson's disease.

Those cells were ‘real, personal’, cells of identical twins and their parents from the Dutch Twin Register. Because the twins are genetically identical, Hillger expected the same reaction with them. But the parents are genetically different, which could lead to different reactions.

She discovered that the reactions of receptors on medicine and the comparable substances indeed can differ because of genetical variation (see figure below). For two of the studied receptors those differences were sooner visible when the substances activated part of the receptor than when it was fully activated. With one receptor it even influenced the reaction on the body’s own substances, which could contribute to the development of diseases as diabetes.

With two receptors the genes changed the receptor and thereby influencing their response to medicines. But for the receptor that is involved with Parkinson's disease there were differences in the gene that did not directly changed the protein itself. Earlier on during the translation of gene to receptor there were some changes.

Although the proteins were the same, it did result in a different response. ‘So, something in the gene influenced the reaction of the cells and the efficiency of the medicine. Probably less or more of the receptor is produced by the cells,’ Hillger explains.

With her research Hillger shows how valuable it is to incorporate genetical differences during the development of medicines. 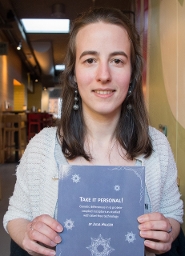 But she also emphasises the importance of a follow-up study. ‘My research is in a too early stage to influence the development of medicines. Therefore, more people should be compared than the five till ten individuals in my study. Furthermore I only studied the genetic differences. It is interesting to also include differences in lifestyle and environment in a follow-up study.’