By analysing the metabolism using big data techniques, we can identify health risks at an earlier stage. Thomas Hankemeier, professor of Analytical Biosciences at the Leiden Academic Centre for Drug Research, explains how that works.

You do research on metabolites. What exactly are those?

‘Metabolites are the products of the metabolism. They are in the blood, which is why we can measure them well, and monitor the metabolism through them. The metabolism says a lot about your current health, more than your genes, for example. By looking at genes we can see whether  someone has a higher risk to get certain diseases, but whether a person actually gets ill depends on more things. There are many factors at play: lifestyle, diet, what kind of infections you’ve had in your life. All this affects how health develops.’ 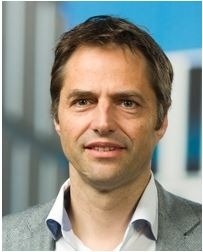 And the metabolism gives us clues about this?

‘Yes, measuring the metabolism provides us with lots of information: where do you stand right now, in terms of health, and where are you going if you keep doing what you do? Sometimes we can predict at an early stage that someone will get a particular disease. And with that knowledge, that person can intervene earlier, for example by adjusting their lifestyle or by taking medicines. Anything can go wrong in the body, especially as we age. The trick is to find out what each person’s weak spot is, because that really differs.’

What is your ultimate goal?

‘It would be great if we could make a metabolic profile for everyone: a profile in which we map each individual’s metabolism. We could monitor these profiles on a yearly basis, for instance. This would allow us to keep better track of individual health risks. We could, for example, see how likely it is that a person's blood vessels or brains become damaged over time, and to what extent this is influenced by behaviour - such as smoking, or certain dietary habits. That way, we can identify problems at an early stage, when it is still possible to intervene. The main purpose of all this is, of course, to stay healthy longer.’

What has to happen before we can make such a metabolic profile for everyone?

‘We are not there yet. At this moment, it is too expensive to create and monitor millions of profiles. So first we need to develop new technology, which will allow massive amounts of data to be gathered, processed and analysed in the right way. That is the main challenge we are facing now.’

What role does science data play in this?

‘An important one, because we need to have the appropriate algorithms in order to process all the data. These metabolic profiles include very complex data. On the one hand there’s the genes, and on the other hand a variety of environmental factors. Moreover, many people use medication – aspirin, paracetamol, anything. All these factors influence the metabolism. That makes it difficult to extract the right information from the data.’

Because it is difficult to separate all these different factors?

‘Exactly. What we want, of course, is to not only detect correlations, but to really find causal relationships - for example, that a particular molecule causes blood clotting in a specific body. Because with causal relationships you know where to intervene. Here in Leiden we work together with experts in the fields of data science and statistics, in order to better understand these relationships. In a multidisciplinary team we can solve such problems better and faster.’

In order to separate all these factors, you’ve also developed the organ-on-a-chip. Can you tell us more about that?

‘With the organ-on-a-chip, we mimic an organ, such as a blood vessel or a kidney. We do this by growing a number of blood vessels and organ cells from a person's stem cells on a chip. This allows us to better investigate how the body responds to specific treatments and medications, so it helps us discover causal relationships. In the future we will be able to put the cells of a person with a particular health risk on a chip, and investigate what is the best treatment for this individual.’

Is such an organ-on-a-chip a good alternative to laboratory animals?

‘Yes, in many ways it's a lot better than animals. You work with human rather than animal cells, so you can see how the interactions develop, and monitor the metabolites at the same time. This makes it much more useful. Let alone the ethical component. But, for now, there is still a place for laboratory animals.’

Speaking of ethics: what about privacy? That seems to be an important issue in the context of medical data.

‘Yes, privacy is an issue. With many things we can ask ourselves: who is the owner of this health data? The doctor, or the patient? Those are important questions, because sometimes we deal with sensitive data. But with today's technology we will be able to create a system in which every individual can give permission through their own smartphone, when someone wants to access their health data. I believe that would be the best system, in the end.’

The call for sharing research data gets stronger and stronger, but many scientists are a little hesitant, for competitive reasons. What is your opinion on this?

‘Data sharing is important. Of course you look at your own data first, and publish about your findings, but then it is important to make the data available to other researchers. Therefore, all data should be stored in such a way that someone else can also work with it too. Because ultimately, it is taxpayers' money that is used to finance research. We should always keep that in mind. But, at the same time, we must find a way to give researchers credit for their data, if it leads to new discoveries.’

Thomas Hankemeier received his PhD in analytical chemistry at the VU Amsterdam. From 1996 to 2004 he was Scientific Product Manager in the Department of Analytical Sciences at TNO. Since 2004 he has been full professor and head of the Division for Analytical Biosciences at the LACDR, Leiden University. He is also Scientific Director of the Netherlands Metabolomics Centre and co-founder of MIMETAS, the company that developed the organ-on-a-chip. Hankemeier was appointed Medical Delta Professor in June 2016.