Proteins organize themselves around our body cells through a self-induced force. They indent the cell membrane, which makes them roll towards each other. This discovery provides new insights into processes like nutritional uptake and brain signaling, as well as into such diseases as Alzheimer’s. Publication in Nature’s Scientific Reports.

How do you study something that is too small to be seen? This is what Leiden physicists wondered when they wanted to study how proteins organize themselves within our body. Proteins are responsible for important processes in the body and are as tiny as a molecule. The answer appears surprisingly simple: by developing a model system on a larger length scale and ensuring that this model is consistent with the smaller reality. Still, this is easier said than done.

Group leader Daniela Kraft and first author Casper van der Wel describe their scaled-up model system in Nature’s Scientific Reports. They discovered that their model proteins organize themselves by deforming the protection layer in and around cells – the cell membrane. Until now, experiments had only been able to convincingly measure protein interactions through conventional forces like  electrostatic force or gravity. The membrane-mediated force is based on minimizing the energetic cost of the deformation: when proteins attach to a cell and deform the cell membrane, it is often energetically more favourable for them to be close to each other. And because nature always chooses the option of the least energy, this is indeed what happens (see figure 1). By indenting the protection layer, they attract each other.

Kraft and her team made their discovery with scaled-up versions of proteins. They used spherical colloids—particles a micrometer in size that behave like proteins at nano level despite their relatively large diameter. Kraft: ‘The discoveries from our model system also hold for the much smaller proteins, because our results agree strongly with theoretical simulations that are independent of the length scale. In fact, it holds for any membrane-deforming object as long as it is larger than the membrane thickness.’

The biophysicists know that the measured deformation is indeed the driving force behind the attraction because they discovered that the spherical particles can only be in two states: either the particles deform the cell membrane or they don’t. And only in the case of deformations, are the model proteins attracted towards each other. If the binding energy between the model protein and the cell is larger than the energy it takes to deform the protection layer, the layer instantly wraps around the protein. If not, there is no deformation.

The Leiden results give a unique insight into the organization of one of the most important building blocks in our body. They help cells to take up nutrients and collaborate to regulate brain signaling. On the other hand, incorrect protein organization can have severe consequences. For example, protein accumulations are one of the causes of Alzheimer’s disease. These new quantitative insights may make it possible for scientists to also understand how these processes come about. 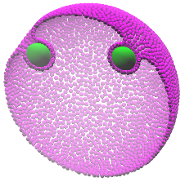 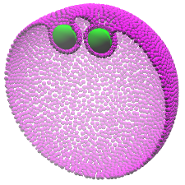 Figure 1. Left: Model proteins (green) attach to a cell and indent the cell membrane. Right: It is often energetically more favourable if the proteins are closer to each other. And because nature always chooses the option that costs the least energy, this is indeed what happens.

Two model proteins (green) move towards one another by making indents in the cell (purple). This deformation works as an attraction force. The Leiden physicists are the first researchers to make this force both visible and measurable.