New Professor for the Faculty of Archaeology at Leiden

Miguel John Versluys (1971) has been appointed Professor of Classical and Mediterranean Studies at the Faculty of Archaeology, Leiden University.

He began his career as a student at Leiden, moving to the Free University Amsterdam (VU) and later to the Amsterdam Archaeological Centre (UvA). Miguel John returned to Leiden as an Assistant Professor in 2006, and has been a  valued and engaged staff member ever since. 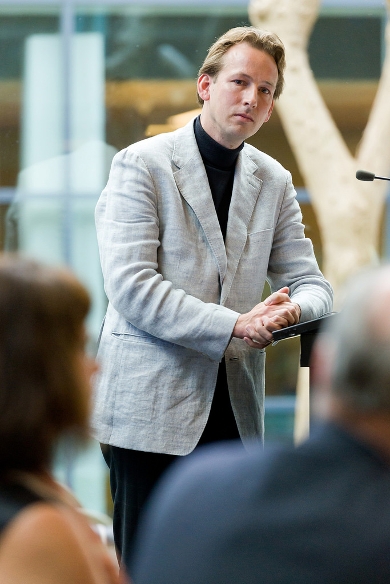 “Those who know, do. Those that understand, teach”

Miguel John is known as an energetic teacher, who enjoys challenging his students. He is Director of the Faculty’s Graduate School (PhD track), and an enthusiast coach, guiding his students to continuing academic success. Many of his colleagues can also testify to his generosity in sharing his  experience of grant application processes, in which he has a successful track record.

Miguel John cultivates an extensive and productive professional network, and is a guest lecturer and conference speaker at many leading institutions in Europe. The fact that these are often in magnificent locations is no coincidence! These collaborations are reflected in his extensive publication list.

Miguel John’s new VICI project Innovating Objects. The agency of global connections in the Roman world (200-30 BC) will have outposts in Samosata and Alexandria. The project taps into the contemporary theme of globalization, and will tackle present-day themes, such as migration, identity and, specifically, the movement of objects.

Next to every great man…

The Faculty Community congratulates Professor Versluys on this new stage in his career. His success is shared by his wife and four sons.