He was part of a panel of the IBA War Crimes Committee on ‘Supporting sides, supplying arms and regime change’, including Karim Khan QC (Temple Garden), Prof. Mike Newton (Vanderbilt), Prof Kevin Jon Heller (Doughty Street) and Donald Ferencz (Global Institute for the Prevention of Aggression). Stahn argued that most existing interventions promoting regime change, such as Iraq or Libya, have delivered far less than they originally promised. He cautioned that concepts such as ‘protection of civilians’ or R2P were not meant to broaden options for coercive action. He said that in most cases of so-called ‘humanitarian intervention’, major powers turned back to the Security Council to fix the consequences of action. If doctrines of intervention had a future, this would be likely in the form of collective forums (including regional organizations) where consent would be expressed ex ante, or in the context of institutional structures that provide a specialized system to deal with transitions from conflict to peace. 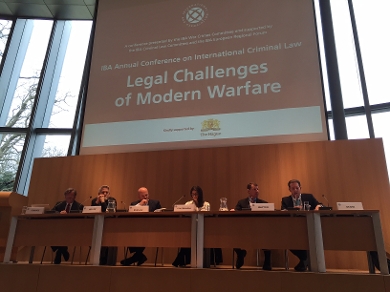