Children and adolescents really do use their ‘smart’ brain areas. This has been confirmed by an extensive and long-running study of the brain carried out by developmental psychologist Sabine Peters . Her findings can have important consequences for education. PhD defence 27 January.

Education tailored to the adolescent brain

Contrary to what has generally been assumed, the smart areas of the brain do not seem to lag behind in their development in comparison with the emotional brain areas. But this research shows that children and adolescents use their areas of the brain – such as the prefrontal cortex – in completely different situations from adults; after receiving positive feedback, for example. In adults, these same regions of the brain are activated after negative feedback. The indication is that in adolescents the prefrontal cortex is ‘offline’, but can certainly be activated. Peters: ‘This study can have important implications for education. It is important that education is tailored both to the possibilities and the shortcomings of the adolescent brain.’

Together with the researchers from Brain and Development, Peters managed to set up a large-scale  fMRI study among 300 adolescents looking at brain development in adolescence. What makes the study unique is not only its scale but also its time span.  Peters: ‘This is one of the first studies to follow so many participants over a longer period of time. That’s important to be able to draw really strong conclusions about the development of the brain in adolescence. It may be that adolescents are more flexible than adults in activating the cognitive regions of the brain. If they are extra motivated by friends or rewards, they will probably perform even better than adults, who are less susceptible to these kinds of stimuli.’ 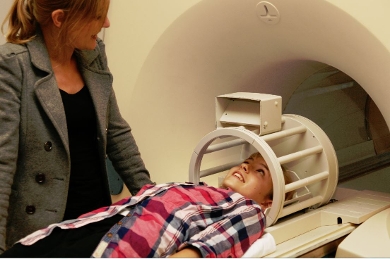 Peters also wanted to find out whether adolescents really do make little or no use of the brain areas for cognitive control, and whether the cognitive regions of the brain lag behind in their development. She also wondered how these smart brain areas develop during adolescence. Peters: ‘Previous assumptions were often based on small-scale and short-term studies. Because this is one of the first longitudinal studies, it gives an important overview of how these brain areas really do develop in young people.’

Peters’ future is with Leiden University, where she will continue to work as a post-doc researcher in the Brain & Development Lab run by Eveline Crone. She will be focusing in future on how adolescents’ self-image and self-confidence develop.

Braintime is an extensive and unique Leiden research project that took place from 2011 to 2015, in which researchers tracked the brain development of almost 300 young people over a longer period of time. The research focuses on learning, risk behaviour and how friendships are formed.