On Thursday 28 January 2016, Prof. Carsten Stahn contributed to the OPCW Sub-Working Group on Non-State Actors, together with Professors Andrew Clapham (Geneva) and Dapo Akande (Oxford), in the presence of the Ahmet Üzümcü, Director-General of the OPCW. 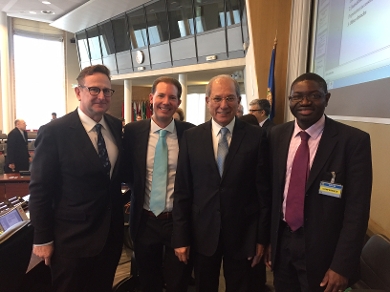 Stahn argued that there is significant authority for the proposition that the ‘use’ of chemical weapons is prohibited under customary international law. The case is most compelling in times of armed conflict. A customary prohibition includes international and non-international armed conflict. Factors indicating a peacetime prohibition are: the quasi universal adherence to the Chemical Weapons Convention; national implementing legislation and existing UN practice, including resolutions in the aftermath of Syria. Stahn also discussed case law indicating the criminalization of the use of chemical weapons. He argued that the ‘use’ of chemical weapons may amount to a war crime, crimes against humanity or genocide.