As of 1 September 2015, Michiel van Groesen is Professor of Maritime History at Leiden University. He succeeds Professor Henk den Heijer, who retired and gave his farewell lecture at 25 September. Den Heijer held the chair from 2010 to 2015. Before coming to Leiden Van Groesen worked as Associate Professor (UHD) of Early Modern History at the University of Amsterdam. 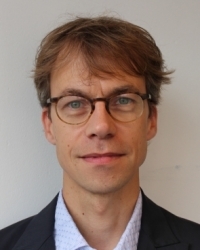 My interest in Maritime History is embedded in the culture of the Dutch Golden Age and the Atlantic world. For my PhD (UvA, 2007), I analyzed representations of the non-European world in the De Bry collection of voyages, one of the most monumental publications of early modern Europe. This collection contains around fifty travel accounts written by famous explorers such as Jean de Léry, Walter Raleigh, and Jan Huygen van Linschoten. By translating these texts, and designing hundreds of sensational copper engravings, the De Brys manipulated their contents for a confessionally divided readership. The German editions were aimed at a Protestant audience, the Latin translations were sold in Catholic Europe. Both versions - despite their differences - helped to legitimate European colonialism in the next two centuries.

Since then I have worked on the history of Dutch Brazil. Last year I published a volume of essays entitled The Legacy of Dutch Brazil, which argues that this brief colonial interlude (1624-54) is an integral part of Atlantic history, and made an impact well beyond national narratives in the Netherlands and Brazil. Repercussions of the West India Company's infiltration in the Southern Hemisphere resonated across the Atlantic basin and remained until long after the fall of the colony. Next year I hope to publish my second book which examines the storyline of Dutch Brazil as a major multimedia event in early modern Europe.

Currently I am leading the NWO-Vidi project Covering the Ocean which studies transatlantic news in early modern printed newspapers in the Northern and Southern Netherlands. The project is comparative in nature, because I believe that the historiography of Dutch expansion must abandon its national purpose, and instead be examined in an international framework. I have taught Dutch History at University College London (2002, 2005) and at Columbia University in New York where in 2013 I was Queen Wilhelmina Visiting Professor. Based on my experiences with students there, I think that Maritime History in Leiden, with its rich tradition, is uniquely positioned to make a broad international impact.