Every month a member of the Institute for History tells about a book that inspired him or her. Afterwards, the pen is passed on to another colleague. This month dr. Meike de Goede tells about the book 'Between Tides' by Valentin Mudimbe. The novel, little known beyond the circles of Africanists and literature critics, tells about Pierre Landu, a young African man who is struggling with identity in an age of political turmoil. Writer Mudimbe lets his novel reflect on the historic interaction between Africa and the Western world.

Between Tides by Valentin Mudimbe

There are lots of books on the reading pile at home, most of them staring angrily at me because I haven’t finished reading them and then picked up something else. Then there is always a pile of books that blink seductively because I should really read them again. Mudimbe’s 'Between Tides' is such a book. I read it for the first time a few years ago. I found it such a compelling story, written in beautiful prose full of strong phrases, that I’ve been meaning to read it again ever since. 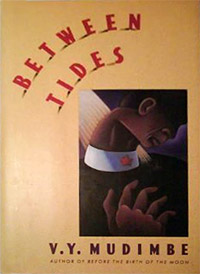 Mudimbe is known as a philosopher and scholar, much less as a novelist. He has, however, written several novels, many of which have been translated in English, and some of which have won prestigious awards. His most famous scholarly work is 'The Invention of Africa' in which he discusses the historic systems of knowledge through which we have come to understand Africa. It subsequently raises the question of what the meaning of Africa and being African is. It is an important book for historians of Africa and in fact for all Africanists, because it reflects on our work on such a profound level. The historic interaction between Africa and the Western world, and its implications on identity are important themes that are central in Mudimbe’s philosophy. These are also returning themes in his novels. This is of course no coincidence. As he explained on several occasions, his novels are for Mudimbe himself just another medium through which he expresses his thoughts and ideas. However, although the novels are perhaps a more easily accessible medium which reaches a different audience, Mudimbe’s novels are little known and hardly read beyond the circles of literature critics.

The protagonist of in Between Tides is Pierre Landu, a young African man who is struggling with identity in an age of political turmoil. The story follows Pierre’s journey in pursuit of acceptance and self-acceptance. It is set in an un-named African country, but which could very well be the Democratic Republic of Congo (then Zaire), Mudimbe’s own country of origin.

As a young boy, Pierre joins the Catholic missionary school. After his school education he is sent to Rome where he becomes a priest. When he returns home, he finds himself estranged from his family and his community, but in effect he is also estranged from himself. He finds himself to lost between tides. His seminary education has exiled him bit by bit from his own people, it ‘prepared me well to despise my own people and their beliefs. […] plucked me from my dark, pagan nights.’ Pierre struggles with his faith, and with the God who reminds him ‘more and more of an insurance company.’ But he also struggles with God as a European God, a God that is complicit in colonial domination. The Catholic Church, and Catholic faith has for so long been an instrument of colonial oppression. Being part of this institution feels like betrayal for Pierre: ‘I must have betrayed my origins spontaneously an ingenuously to feel so comfortable in a system that my grandfather had never heard of.’

The Catholic Church provides him with an identity that is not fitting snuggly. He is not a priest, but a black priest, he states to his colleague father Howard. He is not one of them, he is different and he does not feel accepted. But with the complicity of the Catholic church in colonial domination, he also feels ill at ease as a priest. Feeling unable to be a ‘good Christian’ and a ‘good African’ at the same time, Pierre leaves and joins a Marxist rebellion, which he hopes will prove to be ‘the midwives of a healthier society, so that the sacrifice of the cross will no longer be a lie’. Within the Marxist rebellion he hopes to find what he could not find in the Catholic Church. But while his community has rejected him because of his Catholic faith, the Catholic church rejected him as equal because he is an African, the Marxists reject him because of his upbringing in the Catholic Church and his adopted Christian name. He is lost between different worlds, none of which accepts him or trusts him. Eventually, Pierre gives up and wants to leave, for the third time – ‘my vocation is treason’, he says, first his relatives, then the church, and now the Marxist rebellion.

It is an utterly sad story. What is so intriguing about this story is that it captures so well the complexities of life and identity of Africans not only in the time when the novel was written, but also now. These issues were current then, and still are forty years later. The legacy of colonialism, the ideological promises of a better future, the pursuit of emancipation and getting rid of the yoke of oppression, only to discover that the narrative of emancipation would become the next narrative of oppression. It is about identity, finding and positioning oneself in a complex world; and how to marry the multiple identities in such a volatile and constantly changing environment. These are timeless issues that are at the very heart of much of the turmoil in contemporary Africa. Pierre wants to belong and find his place in a world, a good world in which he believes. He hopes to find this within the church, within the Marxist rebellion, but he will never truly belong, nor truly be. In his struggle to find his place, he in effect loses himself. These struggles with identity in a volatile world are so important for what we observe in Africa today, in which people pursue self-realisation in a complex world of conflict, religious fanaticism, and also material and spiritual aspirations, and in which people try to escape the reality in which they live in.

The novel does not blame anybody, neither the Catholic Church, nor the Marxists, nor Pierre and his compatriots. Perhaps it blames history. The novel is a critique on historic international involvement in Africa, and the legacies of it, but it is not a forceful critique. It is much more subtle. But Pierre’s identity crisis, and the panic he experiences cries out loudly and this is what makes the novel so very gripping. Pierre is struggling with the legacy of colonialism and for survival of his self. Eventually he fails.

I pass the pen to Robert Stein, who once taught me with so much vigour and passion how to decipher mediaeval manuscripts. I’m curious what he will read during the holidays.