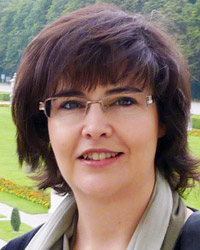 I was born in Lisbon and after completing my BA, I went on to obtain an MA (1993) in Portuguese Overseas History at the Universidade Nova de Lisboa. I worked as a lecturer at the same university for several years while conducting research for my PhD project, and was granted this last degree in 2007. My main research areas lie within the Early Modern history of Portugal and her empire, with a special focus on economic and institutional processes that underpin state formation and empire-building. For my PhD project, I examined the establishment of a fiscal system in Portuguese Asia in the 16th and 17th centuries, arguing that the State’s revenues were amply redistributed given the control exerted by officials and local elites over the allocation of expenditure. In 2008, I was granted a post-doctoral fellowship from the Fundação para a Ciência e Tecnologia (Portugal). In this research I focused on the new diplomatic alignments that Portugal established on the eve of the War of the Spanish Succession, especially with the Holy Roman Empire, and their outcome. Part of the results of this project was published in a co-authored book ( A Rainha Arquiduquesa, 2014).

From 2008 to 2011, I have expanded my interests to the transformations of the economic history of Portugal since the Middle Ages. Together with two colleagues, Leonor Freire Costa and Pedro Lains, I have published a book ( História Económica de Portugal, 1143-2010) which provides a survey of the literature and also includes original material. The book was submitted for review to Cambridge University Press and accepted for an English language edition and we are now on the last stages of the translation’s revision.

I am currently involved in the ERC Research project ‘Fighting Monopolies’ led by Cátia Antunes. In this project, I will be focusing on Dutch firms operating from Lisbon in the first half of the 18th century. During this period the Portuguese capital played a pivotal role in European and world commerce, due to the gold cycle and the prosperity of Brazilian commerce. Drawn by new business opportunities in Portugal, a few of these firms extended their activities and became involved in the State’s finances, through the adjudication of monopolistic contracts.