Game of reality and literary imagination 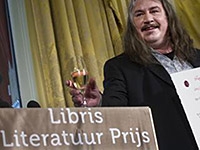 Pfeijffer was moved when he received the prize and he felt extremely grateful for winning the award this year. "Art is not a game and literature is no contest, though I must admit that it is somewhat easier to say that when you have won," said Pfeijffer. With the prize, he wins 50,000 euros.

He received the Libris Literature Prize for his book La Superba, a story about love in a labyrinthine city. The story had previously been shortlisted for both the AKO Literature Prize and the Flemish Golden Book Owl. According to the jury, the book is "an important novel with universal eloquence, that deserves many new readers in the following years." Pfeijffer is praised for the way he plays a superior game of reality and literary imagination with the reader.

Paul Witteman presented the award on Tuesday night at the Amstel Hotel in Amsterdam.