Kate Ekama is one of the three PhD-students on Cátia Antunes' 'Challenging Monopolies' project. 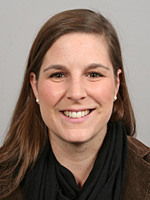 "I was born and raised in the shadow of Table Mountain in Cape Town, South Africa. After high school I went to the University of Cape Town (UCT) and completed a BA, with majors in Economic History and English literature. Following my Bachelors I travelled abroad for six months with my family. I missed the university environment during the time away which confirmed my desire to study further, so on returning to Cape Town I registered for a one year post-graduate Honours degree specializing in history.

During the first semester I took a course on the social history of the Dutch East India Company at the Cape – that sparked my interest in the VOC. It was the first time that I worked on court records, which has turned into a real passion. My research paper for that class – on notions of honour among slaves at the eighteenth-century Cape – became the basis of my Honours thesis.

Towards the end of my Honours year my supervisor – Nigel Worden – asked me if I would be interested in studying abroad and told me about an opportunity to study at Leiden University. I was accepted into the Encompass programme to do a Research Masters degree here and wrote my thesis under the supervision of Alicia Schrikker and Robert Ross. For my thesis I pursued my interests in the VOC, slavery and criminal records and focused on slavery in Colombo, Sri Lanka during the VOC period.

Earlier this year I heard about Cátia Antunes’ Challenging Monopolies project and decided to apply. The day before I defended my MA thesis I was offered the job! I am looking forward to spending the next four years delving into the records of the Supreme Court of the Dutch Republic to research instances in which free agents and their networks opposed the Dutch East and West India Company monopolies in court. I am very excited about staying on in the Institute for History, being part of the project team and getting stuck into my research."