Our research aims at understanding charge transport and interactions in two-dimensional systems such as Van der Waals materials and monolayers of molecular semiconductors on the nanoscale.
To achieve this, we develop and use spectroscopic low-energy electron microscopy methods to study growth dynamics, electron transport and band structure of these complex materials with nanometer resolution and in real time.
I am currently leading the Van der Molen lab here at Leiden University.
Please feel free to approach me for collaborations or Bachelor and Master projects at any time. We currently have no vacancy, but I’d be happy to support your application to PhD or postdoc fellowships.

With our group, we focus on fundamental research into the inner workings of artificial Van der Waals materials, molecular semiconductors and the interaction of low-energy electrons with matter. We develop and use low-energy electron microscopy (LEEM) methods to probe the rich properties of these systems on the nanoscale and complement those with low-temperature magnetotransport experiments on nanofabricated devices. 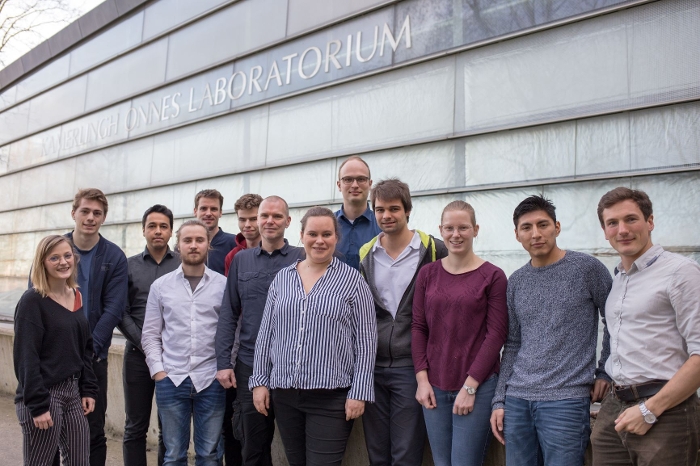 Van der Waals materials are crystals that are artificially composed of individual, atomically thin layers.
They offer many opportunities for application and fundamental research alike. The building blocks of this atomic LEGO construction set range from metallic graphene, semiconducting transition metal dichalcogenides and insulating boron nitride to more complex layered crystals. This ever growing family and the possibility to stack them in arbitrary combination and rotations offers versatile platform to probe complex problems in condensed matter physics that are not accessible otherwise.

Photoresists for EUV lithography are thin films of complex molecules that react upon illumination with extreme-ultra-violet (EUV) light. They are a key building block of the next-generation lithography methods to fabricate computer chips with ever decreasing feature size. The EUV photons, however, create a cascade of low-energy electrons. They are crucial for the performance of a resist but it is impossible to disentangle their influence in typical EUV experiments. We take the photon out of the equation by illuminating with low-energy electrons in the LEEM directly.

Currently, our main projects are: 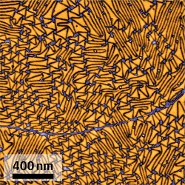 Like most novel materials, Van der Waals heterostructures and crystalline, molecular semiconductors are not available on large scales, yet, and many of their exciting properties stem from local variations. Consequently, we use low-energy electron microscopy (LEEM) to investigate these materials with nanometer resolution.

In LEEM the sample surface is illuminated with a coherent beam of low-energy electrons (typically 0 to 50 eV) and images are formed from the reflected electrons. In addition to providing images with nanometer resolution, this has two key advantages. First, information about the crystal structure can be obtained by low-energy electron diffraction (LEED) or dark-field imaging locally. Second, recording images while changing the electron landing energy yields movies where each pixel contains local spectroscopic information about the material. This can be used, for example, to unambiguously determine the number of graphene layers in a sample as shown in the video and figure at the side. To answer our scientific questions, we develop novel LEEM-based techniques.

Low-energy electron Potentiometry
If a bias is applied over a sample, the landing energy of the electrons becomes position dependent, which manifests as a shift of the electron reflectivity spectrum. This shift can be evaluated per pixel to extract the local potential at the surface. Based on this insight, we developed a novel low-energy electron potentiometry technique to study intrinsic variations in surface potential as well as charge transport on the nanoscale (article).
(Vera Janssen, Tobias de Jong)

Angle-resolved reflected-electron spectroscopy (ARRES)
We developed a method to measure the full unoccupied band structure of a material by varying the in-plane k-vector of the imaging electrons in addition to their energy (article). Since the information is acquired from LEEM images, this new method has ~10nm lateral resolution and is therefore the only tool able to study unoccupied bands of novel materials such as Van der Waals crystals that are typically available in small flakes only. We use ARRES, for example, to study the interaction between layers of artificially created Van der Waals materials (article). The figure shows the unoccupied band structure of boron nitride, a widely used substrate for high-mobility graphene electronics.
(Marcel Hesselberth, Byron Vizhco, Tobias de Jong)

Cryogenic LEEM
We are currently in the final stage of a multi-year effort of developing a LEEM instrument where the sample stage can be cooled to ~20 K. Applying ‘conventional’ LEEM together with ARRES and potentiometry at cryogenic temperatures will allow us to study the relation between charge transport regimes and structural changes, and will open a new window to correlated electron behavior such as charge-density waves, Mott insulators or superconductivity.
(Arash Tebyani, Claudia Valkenier, Marcel Hesselberth, Douwe Scholma, Ruud van Egmond, René Overgauw).

I studied physics at the Free University in Berlin and the Friedrich-Alexander University Erlangen-Nuremberg.

In 2008, I joined the group of Heiko Weber at the Friedrich-Alexander University Erlangen-Nuremberg for my PhD. I investigated the growth of graphene on silicon carbide and studied its electronic transport properties. My focus was on the characterization of quantum corrections to the conductivity that I studied at low temperatures and high magnetic fields. In Erlangen, I enjoyed the interdisciplinary work within the cluster of Excellence ‘Engineering of Advanced Materials’ as well as fruitful measurement stays in Mike Spencer’s group at Cornell University and at the high magnetic field lab in Grenoble.

I moved to Leiden in 2013 to join the group of Sense Jan van der Molen to change my research focus towards electron microscopy. Combining this field with the expertise from my PhD enabled us to develop a new technique to study charge transport with high lateral resolution.

In 2015, I won a personal VENI grant to work at Leiden University and Columbia University on novel Van der Waals materials. I prepared artificial Van der Waals heterostacks as team member of the Dean lab at Columbia University. Here in Leiden, I lead the two-dimensional materials group in the Van der Molen lab where we use low-energy electron microscopy to understand their properties in unprecedented detail.

Since 2018, I am leading the whole Van der Molen lab while Sense Jan is on an extended leave.