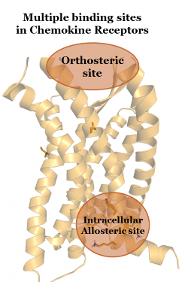 The chemokine system is comprised of more than 20 different chemokine receptors—which belong to the class A or rhodopsin-like family of GPCRs—and almost 50 chemokine ligands that play a critical role in the immune system. Dysregulation of this system can lead to different pathologies, including inflammatory and autoimmune diseases such as atherosclerosis, rheumatoid arthritis and even cancer. The involvement of these receptors in many pathologies has resulted in many efforts to develop chemokine receptor antagonists; however, only a few antagonists have been approved for clinical use so far. In general, lack of efficacy has been reported as the main reason of Phase II and Phase III failures, making the development of more predictive preclinical models in earlier phases of research highly necessary. A thorough understanding of the mechanism of action at a molecular level is crucial for the development of drug candidates with better safety and efficacy profiles. In this regard, the concepts of drug-target residence time and allosteric modulation have gained increased interest as more evidence suggests that they play a critical role in in-vivo efficacy and safety.