Urban ecology and avian acoustics: Function and evolution of birdsong in a changing world

Birds sing to be heard, but how do they cope with increasing noise levels? Which species persist in cities and why? And do they thrive or suffer in the urban soundscape?

Birds typically sing to deter competitors and to attract mates. Acoustically they have to cope with natural obstacles such as vegetation and rocks or buildings. Furthermore, natural soundscapes are increasingly affected by noise from traffic in the air and on the ground and all sorts of industrial and recreational activities. We study how birds cope under noisy conditions: whether they change their singing patterns, whether they still hear and respond to songs of their neighbour, and whether such changes in production or perception of songs affect their reproductive success. 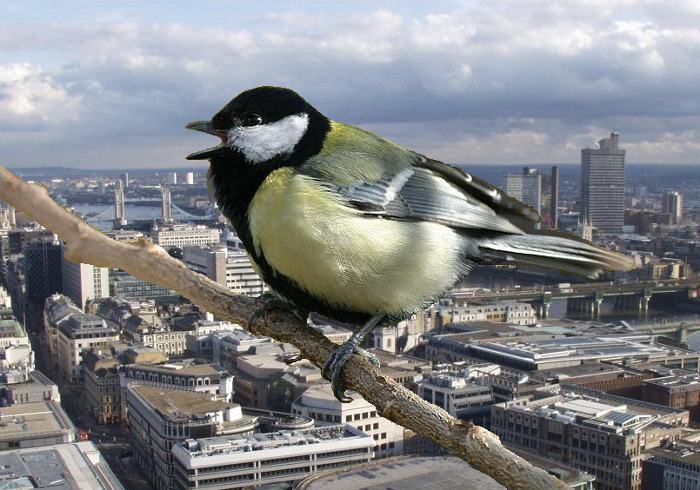 We started this research with a study published in 2003. MSc-student Margriet Peet had recorded great tits (Parus major) in Leiden and Leiderdorp at quiet and noisy places in the urban environment. She found that birds in territories not far apart vary in the use of song frequencies at the lower end of their range. Birds refrained from using low notes under noisy conditions. This correlation between traffic noise level and song frequency use within a population was repeated among populations throughout Europe in 2006.

Subsequently, PhD-student Wouter Halfwerk revealed experimentally in 2009 that these correlative patterns are at least partly explained by rapid noise-dependent changes in song type switching and showed effects of noise on reproductive success and intra-pair communication in 2011. We continue to investigate this very suitable and popular model system in our backyard by experimental approaches in the field to study causes and consequences of song variation in urban birds.

Urban birds not only sing differently from their rural counterparts, but also concern a different set of species and maybe also a different set of personalities. Cities are often not less species rich than the surrounding natural habitat types, but the composition is very similar in many cities over vast geographical ranges. We are interested in whether acoustic performance capacity plays a role in the variation in urban success. Urban birds are also reported to be more aggressive relative to nearby birds in the country side. We investigate whether birds of particular personality are more prominent and successful in cities or whether noisy conditions may also annoy birds and make them more aggressive.