The population of lions has declined in Kenya from 2,700 in 2000 and 2,200 in 2009, especially in pastoral community areas, which have been a stronghold for lions. Such a stronghold is represented by Nairobi National Park and its adjacent livestock areas. This park is located in the outskirts of  the Nairobi urban conglomerate The southern part of Nairobi National Park is not fenced and being the migratory corridor of wildlife, the lions have been exiting the park and causing increasing conflicts during the past years. The increasing trend of lions raiding livestock behavior in the southern buffer zones of Nairobi National Park has resulted in increased livestock predation and the retaliatory killing of 6 lions 2012. 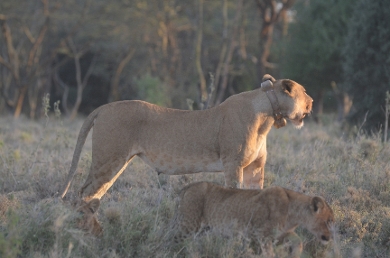 Globally, conservation biologists generally encourage human-wildlife co-existence through conflict-mitigation programs, compensation schemes or payments for tolerance.  However, despite coexisting for millennia, recent human activities have caused declines in carnivore populations and contraction of their geographic ranges. Especially large and dangerous carnivores, such as the lion, present a challenge in conservation science because of their large ranges, low densities and high propensity to livestock conflicts. Subsequent to recent retaliatory lion killings after livestock depredations, there is now an acute need for successful conflict mitigation to ensure the future existence of lions in Nairobi National Park.

My PhD research will focus on the conservation of  lions inside  Nairobi National Park and in the surrounding areas in relation to human – lion conflict around the  park. I will look into factors influencing human-lion conflict, the lion’s prey choice and diet and home ranges and movements in a semi-fenced park. I will also cover with my research socio- economic aspects such as herding practices and traditional mitigation measures in contrast to modern measures (flash lights) and I will analyze their effectiveness against lion attacks. 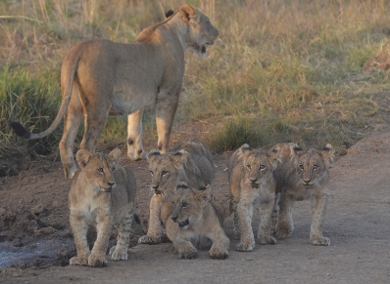 The Nairobi National Park (NNP) Lion Project is a collaboration between the Institute of Environmental Sciences (CML) Leiden University in the Netherlands, Kenya Wildlife Service (KWS) and the Leo Foundation in the Netherlands. The lion collaring program is funded by the Safaricom Foundation – Kenya and WWF-INNO. The Nairobi lion collaring was done on 25 -26 th January, 2014 and during 31 January until 5 February 2015

In this research we are  looking for conflict mitigative measures in five research topics:

In this project all the five research topics  will cover causal factors related to livestock raiding behaviour of lions and the effectiveness of mitigative measures in NNP.