This project is funded Netherlands Fellowship Program of Nuffic
Partners

This study has a direct relevance to the society since it is targeted at the management and conflict mitigation between human and wildlife. The synthesis of examined themes under this research will aid in the formulating better strategies to nullify HWC and provide base for building up better conservation action plan for the government agencies and other organizations working on conservation sector. The use of genetic based tool will be of great help in areas such as inter and intra specific identification, population census and combating anti-poaching activities using wildlife forensics.

In a recent study carried out in Bardia National Park (BNP) it has been found that there is an increase in tiger population inside the park. The human population around the buffer zone of BNP is also growing. So with the growth of both tiger and human population there are chances of increased human-wildlife conflict. Leopards are also present in the area and it is known from other regions that the interaction between tigers and leopards may lead to Human-Wildlife Conflict (HWC). This study on HWC in BNP, will analyze the factors influencing interactions between “problem animals” like tigers and leopards and local communities in the park and buffer zone of BNP. Local perception and strategies to mitigate human-wildlife conflicts in areas outside the BNP will also be analyzed. Study will be done using non-invasive techniques like molecular scatology to identify and make a DNA fingerprint of individual animals, and to know about the home range and population size. The diets of problem animals will also be analyzed and the percentage of livestock in the diet will be determined. This proposed research will help Nepalese authorities in formulating policies and plan in order to reduce human-wildlife conflicts. 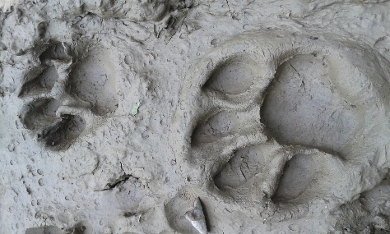 The pugmark of a tiger at Bardia National Park Nepal

Conservation Biology research group of CML in Leiden University has done similar kind of research in other parts of the world so the expertise of research group can be used in this research as well. This research will address the issue of human wildlife conflict in and around Bardia National Park, Nepal.