Negotiation can only really be an alternative to warfare, if the parties agree on a framework of rules and procedures. And if the confidence of the partners may increase in another. But negotiations continue to wage war by peaceful means. 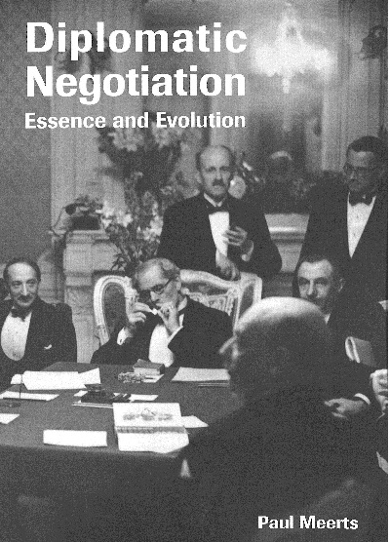 Diplomatic Negotiation is difficult to grasp, both in practice and in theory. Yet it is important to get to grips with this process, as negotiations between states and in international organizations are the lifeblood of the international body politic. The Charter of the United Nations, for obvious reasons, ranks negotiation as the foremost instrument in the peaceful settlement of inter-state conflicts. Scholars of international relations, however, are still searching for methodologies and theories to explain the outcomes of negotiations by the processes that produce them.

This doctoral dissertation approaches the process of diplomatic negotiation from different angles, while applying a multi-faceted qualitative analysis of case studies from the past and present. It is hoped that a better understanding of negotiation as one of the main tools of diplomacy will help to enhance the effectiveness of this process as an alternative to warfare. Still, negotiation is basically a struggle in the promotion and defence of state interests. It is war by peaceful means.

The central proposition of this book is that negotiations between states can only be a viable replacement of the use of violence if they are conducted within a framework of international regimes that set the rules and procedures for negotiation behaviour and mitigate lack of trust. International regimes may take the shape of international organizations, which can force countries to live up to their agreements. Diplomats and political leaders have come to recognize this, as the evolution of diplomacy in the last 400 years testifies. Diplomatic negotiation may be taken as a ceaseless series of attempts to bring more order to the international system. The current demise of the negotiation processes in the Middle East thus demonstrates the failure of the international community to build overarching negotiation structures.