The Holland Research School of Molecular Chemistry (HRSMC) has honored a proposal for PhD research written by chemistry student David Klein of Leiden University. It is the result of his participation in the HRSMC Excellence Master's programme. David will start his PhD research in December, funded by the Netherlands Organisation for Scientific Research NWO.
The interuniversity HRSMC Excellence Master 'Sustainability: the Molecular Approach’ prepares talented chemistry students for a scientific career. The demanding and interdisciplinary programme, developed by HRSMC researchers at the University of Amsterdam (UvA), the VU University Amsterdam (VU) and Leiden University, has a strong integration of theory, spectroscopy and synthesis. A crucial part is the preparation of a proposal for PhD research. The best proposals are rewarded with an actual PhD position, financed through the NWO/HRSMC Graduate Programme ‘Sustainability: The Molecular Approach’. In previous years chemistry students Kaj van Vliet (VU), Hans de Bruijn (Universiteit Leiden) and Tessel Bouwens (UvA) were selected.
This year the winning proposal was written by Leiden chemistry student David Klein. The assessment panel appreciated its focus and feasibility as well as the way Klein expressed his familiarity with the subject. Earlier in his study Klein received a 'VNCI Topsector Chemiebeurs'. And since 2014 he is the 32th Dutch grandmaster in chess.

David Klein proposes the development of an artificial molecular system for the solar-powered production of hydrogen, mimicking the natural photosynthesis process of green leaves and certain bacteria. The produced hydrogen can directly be applied as sustainable, 'green' fuel, or used to produce sustainable carbohydrate fuels (based on, for instance, carbon dioxide).
Whereas solar panels and recently developed “artificial leaves” require highly advanced and costly materials, the concept proposed by Klein is based on cheap and potentially easy-to-prepare molecular self-assemblies. Such a molecular system should basically facilitate two photocatalytic reactions: water oxidation (producing oxygen) and proton reduction (producing hydrogen). These two photocatalytic reactions have to be carried out in well-separated compartments, while efficient and unidirectional charge transfer is required to transport electrons and protons from one photocatalytic site to the other.

Klein proposes to develop such a molecular system using liposomes as a support for the photocatalysts and using a nanofiltration membrane to separate the two distinct photocatalytic reaction systems. His system is completed by a water-soluble molecular electron relay to transport the electrons and protons between the two sites. 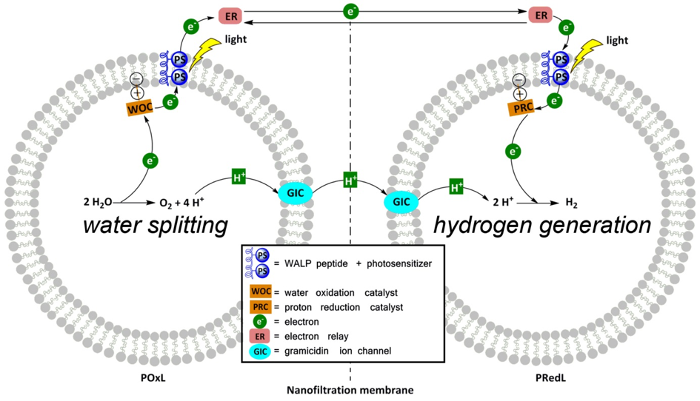 Schematic respresentation of the system David Klein proposes for photocatalytic water splitting. The liposomes will encapsulate water oxidation or proton reduction catalysts (CAT) in their interior aqueous compartment and contain a transmembrane WALP peptide functionalized with photosensitizers to achieve electron transport through the lipid bilayer. Furthermore, a gramicidin ion channel (GIC) will be inserted into the membrane to achieve fast proton transfer through the lipid bilayer.

David will start his research in December in the research group 'Metals in Catalysis, Biomimetics & Inorganic Materials'(MCBIM) at the Leiden Institute of Chemistry, supervised by professor Lies Bouwman. For a fundamental understanding of the photocatalytic and electron transfer processes he will apply advanced time-resolved spectroscopic techniques under supervision of professor Fred Brouwer at the Molecular Photonics research group of the Van 't Hoff Institute for Molecular Sciences (University of Amsterdam). MCBIM researcher Dr Sylvestre Bonnet will act as co-supervisor.

The Holland Research School of Molecular Chemistry is a consortium of three Dutch Universities: the University of Amsterdam, the Vrije Universiteit Amsterdam and Leiden University. HRSMC has been approved by the Royal Netherlands Academy of Arts and Sciences (KNAW) since 1994. It provides an extensive training programme for PhD students in chemistry and offers a high quality research environment. The HRSMC is the only research school in the Netherlands that addresses societal challenges in areas such as sustainability, energy, and health from a molecular perspective.