Nadine Akkerman and her co-applicant David van der Linden (University of Groningen) are thrilled that “Signed, Sealed, & Undelivered 2.0: Revealing Hidden Letters” was awarded an Internationalisation in the Humanities grant from NWO. 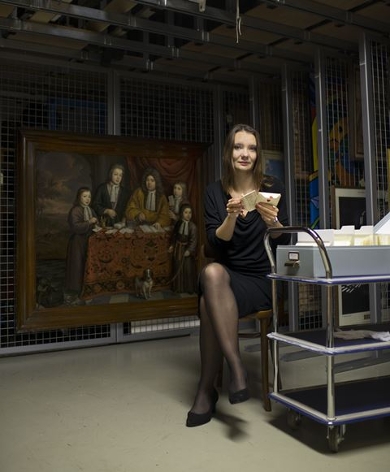 The Signed, Sealed, & Undelivered team was formed in 2014 to preserve, digitize, and edit the contents of a truly unique archive at the Museum voor Communicatie in The Hague: a 17th-century postmaster’s trunk containing c. 2600 undelivered locked letters – including 600 whose seals have never been broken. The team has no intention to break these seals; instead they will experiment with non-invasive scanning techniques to read the letters without opening them. Thanks to a grant from Metamorfoze, the Netherlands’ national program for the preservation of paper heritage, the team has digitized the opened letters in an innovative way so that both words and folds are visible. An NWO Added Value for the Humanities grant allowed the team to run test scans of the closed letters and to start the process of recording and interpreting the material features and contents of the opened letters – fascinating and unique records of everyday life from all over Europe.

The first NWO grant created the public–private partnership, allowing long-term work on the letters to begin. With the current Internationalisation in the Humanities grant, which will run for three years, the team seeks to further develop collaborative science and humanities methodologies for reading the 600 closed letters without breaking their seals, and to develop new international partnerships and cataloguing standards for complex collections of historical correspondence.