You’re never too young to be an entrepeneur: An Interview with Public Administration student and entrepeneur Ebel Slijp

It is difficult not to feel intimidated when looking at Ebel Slijp’s Linkedin profile: with only 23 years old, Ebel has been featured in the ‘Jonge 100’ (Young 100), the ‘Duurzame Jonge 100 (Sustainable Young 100)’ and the ‘Top 25 under 25, all awarded to him for his entrepreneurial spirit. With his Animation company Refreshworks, he has worked for several international and national artists, including Miley Cyrus, and he has managed to become Senior Operations Manager in the highly promising company Hyperloop Transformation Technology. And if that was not enough, Ebel is also a third year Public Administration student at Leiden University. We spoke with the inspirational student to ask him all about it.

First, how did you come to where you are now?

‘‘Well, I guess you could say that I have always had an entrepreneurial mindset, even before University. But one of the things that greatly helped was the Growth Hacker course I took at the Growth Tribe Academy – an Academy set up by Facebook and the University of Amsterdam with the idea of scientific marketing. Growth Hacking originated in Silicon Valley, and it aims to train you in all sorts of scientific marketing experiments in order to optimize your marketing. There were only 21 spots available and lots of applications, but luckily I got in! I was able to apply the knowledge I had obtained in this course to the company where I am managing partner – Refreshworks.’’

‘‘Refreshworks is a motion studio and digital agency that helps companies to visualize the stories they want to tell their customers. We create all digital content for our clients and optimize their online presence. We started out small – for the bakery around the corner, so to say – but now we are able to visualize for big companies such as Qmusic, Sony Music, Nationale Nederlanden, KLM, you name it. We have even made a music video for Miley Cyrus last year, which was shown on the background at her concert in Amsterdam. ‘’

You are also a Senior Operations Manager at Hyperloop – what is Hyperloop?

‘‘Hyperloop is the transportation of the future. The idea for the Hyperloop came from Elon Musk – the multibillionaire known from Tesla Motors, PayPal and SpaceX. The idea is to transport people from place to place through a closed tube in a capsule that is driven by  solar energy. It is the more sustainable, cheaper and more efficient alternative to taking the train. The idea was happily taken up by German entrepreneur Dirk Ahlborn, who founded Hyperloop Transportation Technology (HTT). At current, 600 people work at Hyperloop next to their full time jobs. Even the way the company pays its employees is innovative – per hour of work you get a certain amount of shares in the company! The innovative mindset of the company has attracted a wide variety of top professionals, including people from NASA, to name just one example. Being able to work with such an inspirational group of people is perhaps even the most exciting part of what I do. ’’

Sounds like something very futuristic, a Hyperloop transportation system.

‘‘Actually, they are currently building the systems in California and Slovakia. The fact that it sounds so futuristic may be true – but technology wise it is already very possible! The hardest thing about this project is not the technical side, but working with the public sector. A new form of transportation could disrupt the whole existing system, something which I am sure a lot of companies are not exactly psyched about.’’ 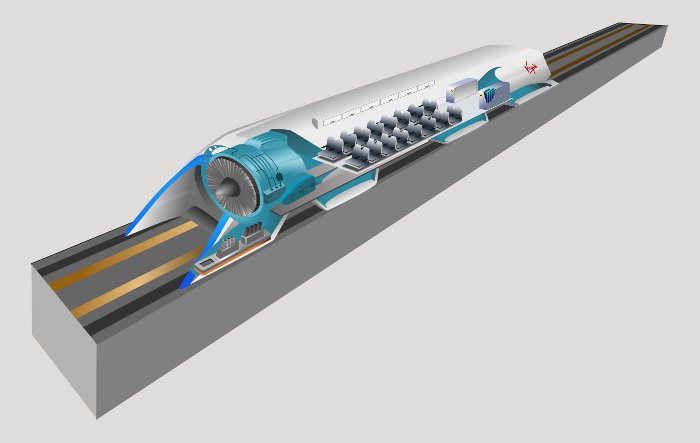 California, Tesla, Multibillionaires…. How did you land the position of Senior Operations Manager?

‘‘Funny story actually: I was with an international delegation of young entrepeneurs at a Conference abroad, when one of the keynote speakers was mr. Ahlborn. After having a few drinks I assembled the courage to go up and talk to him about how much I admired his work. He advised me to apply for this job, and I am proud to say I got it!’’

You work at two companies and are also a third year student of Public Administration. Where do you possibly find the time to combine all this?

‘‘To be honest… it is not going as smooth as it sounds right now. I take a bit longer than the normal three years and I still work from early mornings until late evenings. Of course, it is all very demanding, but in the end I think it is all very much worth it.’’

Does your study in Public Administration also help you in your businesses?

‘‘Of course it does! Public Administration deals a lot with theories on management, which can be applied on a public level, but also on a private level. Especially my courses from an economic perspective have been very useful for this. It is also a good learning experience to see the theories come to life and see how they differ in practice.’’

Do you have a word of advice for other entrepreneurial students?

‘‘If you have a good idea, just do it. A lot of people talk a lot about things they want to do and things they are ‘going to do’, but they never end up doing it. There’s no excuse to postpone entrepreneurship. These days, all the information on how to do things is on the internet. Take your idea and make it flourish!’’

Last question: after all that you have accomplished… what are still things on your wish list?

‘‘A trip in the Hyperloop once it's all done! Another thing that I would love to see happening is an event organized by Refreshworks to thank all of the people and companies that have supported us.’’

And with these words, we would like to conclude this inspirational interview. We are sure that we will hear much more of Ebel, Refreshworks and Hyperloop in the future – and we look forward to it.