The new blog Afro-Asian Visions showcases new and ongoing research on Afro-Asian interactions through networks of artists, intellectuals, technical experts, and activists. It is designed as an online magazine. 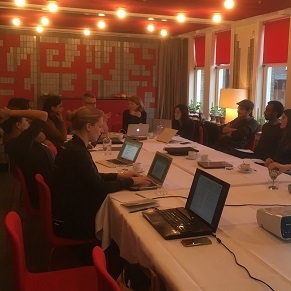 In the 1950s and 1960s, decolonization and patronage from competing Cold War powers created opportunities for new alliances among people across the colonial and postcolonial world. The turn of the millennium saw public commemorations of the fiftieth and sixtieth anniversaries of postcolonial independence in Asia and Africa, but also of the official gatherings that brought together representatives from new and aspiring nations, such as the 1955 Afro-Asia conference in Bandung. While major diplomatic initiatives such as the Bandung conference have gained scholarly attention in recent years, there is little study of the way in which non-state actors throughout Afro-Asia interacted and conversed with each other – not in the key sites of international diplomacy, but through journeys, private initiatives, personal communication, and underground or lesser-known conferences and gatherings.

The new blog Afro-Asian Visions is designed as an online magazine, aimed at  highlighting such connections. It showcases new and ongoing research on Afro-Asian interactions through networks of artists, intellectuals, technical experts, and activists. It is an extension of the project Afro-Asian Networks in the Early Cold War, 1945-1960, run by Su Lin Lewis (Bristol University) and Carolien Stolte. The blog welcomes submissions, both from scholars affiliated to the Institute for History and elsewhere. Contributions on Afro-Asia during the Cold War are especially welcome, but the blog is also set up to think more generally about the practice of doing global history as scholars of Asia, Africa, and the post-colonial world, as well as about the role Digital Humanities can play in such collaborations.

The project, which runs until June 2017 as a collaborative project between Bristol and Leiden, was recently awarded a €40,000 grant by the Arts and Humanities Research Council in the United Kingdom. Earlier this year, all project members convened in the Netherlands for a collaborative research week, in which researchers working on multiple regions shared their findings in real time. In September 2017, further findings will be presented at an international conference in Bristol. The project will also include a joint BA seminar, Afro-Asia in the Early Cold War, in the Spring semester of 2016-2017. A comparable course will run simultaneously at Bristol, and will include a joint Leiden-Bristol classroom through the use of online educational tools.