Veiled references to the Armenian genocide

No criticism is allowed in Turkey of the mass murder of Armenians that took place a century ago. PhD candidate Alaettin Carikci examined how contemporary artists, authors, film directors and museums have nonetheless found indirect ways of expressing their criticism.

A ‘memory war’ has been taking place in Turkey for many years about the fate of the Ottoman Armenians. Turks and Armenians dispute whether the mass murder of Armenians a century ago was genocide. They don't even agree on the number of Armenian victims. Historians estimate that between 600,000 and 1,500,000 Armenians were killed in a deliberate act of genocide. On the other hand, the Turkish state highlights the number of Turkish war victims and history books only present the official denialist position of the Turkish state.

While the Turkish government trivialises or suppresses the remembrance of the Armenians and the Armenian genocide, there are many artists – Turkish, Armenian and multinational – whose work reflects on the Armenian genocide. Turkish PhD candidate Alaettin Carikci examined how contemporary artists, authors and film directors manage to do this in a country where the genocide is still an extremely sensitive issue. They generally find indirect ways of making their opinions known, such as by highlighting the absence of Armenians in modern Turkey. Carikci: ‘By drawing attention to what is not there, they stimulate the public to think about what happened to the Ottoman Armenians and at the same time their absence urges Turkish citizens to think about what happened to the vanished community of Turkey.’ 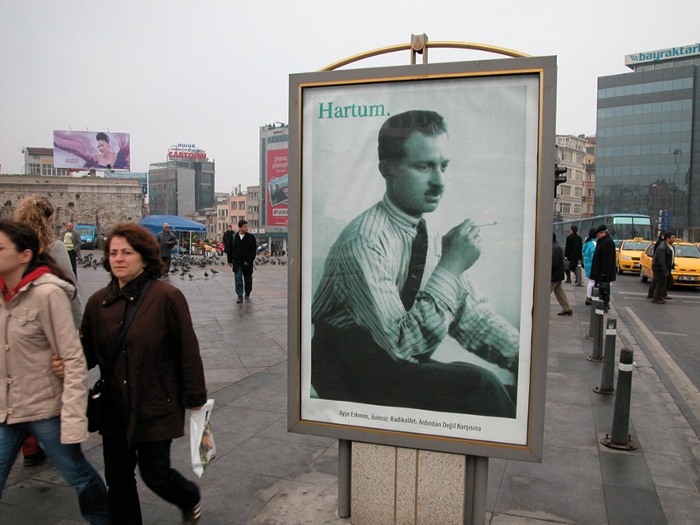 One remarkable art project is ‘Two Siblings’, realised by Ayşe Erkmen. In 2007 she placed two double-sided posters at two prominent locations in Istanbul - Taksim Square and Harbiye. On one side there was a large black and white photo of a woman, Erkmen’s grandmother, and on the other a photo of her brother. Their father was murdered during the Armenian genocide and the brother fled to Sudan; the two spent the rest of their lives separated from one another.

Taksim Square with its  imposing Atatürk monument is an audacious location. By placing photos of her Armenian grandparents directly opposite the monument to Atatürk, the artist juxtaposed the official  glorious and heroic vision of  Turkish history with her personal memory that points out a different version of history. Because of the subtlety with which the message of the works of art is presented, the Turkish government is often unaware of the critical nature of these works, Carikci explains. You have to have a keen understanding in order to be aware that the work is referring to the murder of the Armenians. He claims that Erkmen’s work can be seen as a counter-art project.

Besides a literary work, art projects and a commemorative architectural work, Carikci also analysed the animated film ‘Chienne d’histoire’ (2010) made by French-Armenian director Avédikian. The film depicts the round-up of thousands of stray dogs in Constantinople in 1910. They were all taken to an island and exterminated. Carikci reads the film as an allegory of the Armenian genocide. ‘A rhetorical device can express complex concepts and ideas by telling a story that has an underlying meaning.’

Alaettin Carikci, PhD defence 18 May 2016: ‘The Arts of Memory. The Remembrance of the Armenians in Turkey’