The Faculty of Humanities has been ranked 17th Arts and humanities faculty in the Times Higher Education world ranking 2015-16. This makes it the top non-Anglo-Saxon institution on the list. The position is 7 places up in comparison with last year's list.

The Times Higher Education (THE) assesses universities on a number of indicators in the field of teaching, research and innovation. The THE bases its rankings on data provided by Thomson Reuters in partnership with Elsevier. Leiden University is ranked 67 in the university world ranking.

THE cites Tobias Jones, from the UK, who is studying for a master’s degree in Middle Eastern studies at Leiden University, which he chose on the basis of a recommendation from tutors at his undergraduate university – St Andrews in Scotland – and because of affordable fees.

He said: “I think resources are a large part of why Leiden is successful, as the library is very impressive and through being a student at Leiden you can access countless online databases as well, which normally you would have to pay exorbitant amounts for.”

He also testified to the appeal for international students.

“I was surprised by how many different people from around the world I have met here, and I have really enjoyed the social aspect of meeting people from different cultures. The number of languages people at Leiden speak is quite astonishing!

“I am learning things I never thought I would, and the beautiful city with its quaint canals and cobbled streets certainly contributes to this atmosphere.” 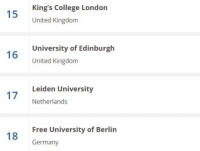 Europe is moving up

In 2014 the Faculty of Humanities was ranked 25th within the subject area 'Arts and Humanities' in the Higher Education Ranking (THE). In this list Leiden was also the highest ranking non-Anglo-American institution.

The top 3 Arts and humanities  universities in the list are Stanford University, Harvard University, and the Massachusetts Institute of Technology. However European universities are beginning to compete with North American institutions in the arts and humanities, as revealed by the 2016 subject ranking released today. Many of the highest-placed European universities in the ranking have moved into the top 20 for the first time this year. In total, 13 of the top 20 are in North America and seven are in Europe.

About the THE Ranking

The weekly magazine The Times Higher Education (THE) has been publishing the THE World University Rankings since 2004. The THE assesses universities on a number of indicators in the field of teaching, research and innovation. The THE bases its rankings on data provided by Thomson Reuters. Important data for the rankings are the number of citations and the results of a survey among academics on the reputation of universities in the field of teaching and research.