The Jewish cemetery of Turnov

Turnov, a town in Northern Bohemia, counting almost 15.000 inhabitants, is situated about 90 kilometers North-East of Prague, in the Semily district. It is the capital of the Bohemian Paradise.

The Jewish cemetery in Turnov is the only well-preserved cemetery of this kind in the Semily district. The Jewish settlement in Turnov started before 1526. The oldest preserved tombstones date back from the 17th. century, the youngest ones from the time shortly after World War II.
The cemetery house was built in 1800. The sandstone tombstones form regular rows, with the inscriptions turned to the south. The inscriptions are an important historical source and they often excel in their poetic qualities. While the texts of the older tombstones are purely in Hebrew, from the 19th century onwards texts in German and Czech also started to appear. The memorial of the World War II victims which was probably destroyed during the construction of the highway has been renewed and placed into the reconstructed cemetery house recently. 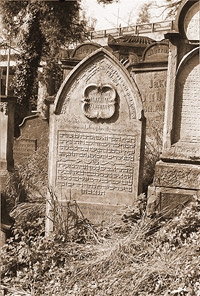 The first aim of this project was to uncover the history of the cemetery, and to list and translate the 568 tombstones of the Jewish cemetery in Turnov. More recently, a second aim presented itself: a collection of the biographical data of the people buried or remembered (638 in total) in the cemetery.

By now, the texts have all been photographed and noted down, and the historical and biographical data have been entered into a database. These data are available to the wider public, on the personal page of  dr. H. Neudecker (see under: Research / Research Database). The photographs of all the tombstones will follow shortly.

This project was originally started in the year 1991, and from that time onwards several different people have worked on it in different periods. In the early years Dr. Karel Jongeling and Drs. Geesje Vos (of the Reeuwijk (NL)-Turnov Jumelage Foundation) have dedicated their time and efforts to photograph and translate part of the tombstones and texts. They also published an edition and translation of a sample of the texts, as well as a historical introduction (K. Jongeling, G.J. Jongeling-Vos & H. Neudecker,  Wat is dat voor een grafsteen? De Joodse begraafplaats van Turnov (Reeuwijk, 2000). Apart from this Dutch version of the booklet, there is also a Czech version,  Co je to za náhrobní kámen­?O židovském hřbitově v Turnově (same authors, place and year)). Photographic work was also carried out by Jan and Baukje Boonstra of Reeuwijk, The Netherlands. It was also Jan Boonstra who translated many texts written in Czech. 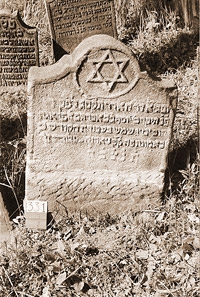 From the beginning this work was carried out in close cooperation with the Municipal Office and the Museum in Turnov. Mgr. Pavel Jakubec, of the State District Archives in Semily offered valuable advice considering place names. He was able to identify many  names used in Hebrew texts.

With this work we hope to encourage further historical research, but also to preserve the memories of the members of the Turnov Jewish community that was and no longer is.