What is the research question? 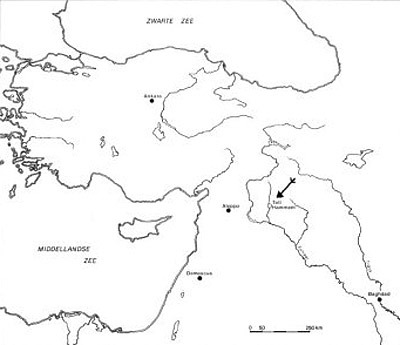 The Faculty of Archaeology of Leiden University is running an excavation project in Northern Syria, at Tell Hammam al Turkman, some 80 km north of Raqqa. The Faculty of Archaeology and the Netherlands Organisation for Scientific Research N.W.O. finance the undertaking, which is directed by dr Diederik J.W. Meijer. Excavation campaigns were held in 1981, 82, 84, 86, 88, 92 and 1995, 1998, and 2001.

Tell Hammam al Turkman lies in the Jazira, on the left bank of the Balikh river, a tributary of the Euphrates. The site has a diameter of some 500m, and is 45m high. Where there is water, the area is generally fertile; Hammam's location is in a marginal zone, where rain-fed agriculture is possible but where irrigation is necessary to obtain permanently reliable succesful crops. From ca. 5000 - 1200 BC people lived on this spot, after which it was deserted for almost a millennium; Just before our era a military garrison built barracks on the tell, defended by a 4m wide wall. At present, occupation has been resumed in a village some 500m north of the tell: Damešliyye.

The research project began in the eighties in order to provide a well-stratified guideline for the settlement history of the region; since then other excavations have joined in the concerted reconstruction of a stratigraphically controlled regional occupation history (Chuera, Dameshliyye, Sabi Abyad, Tell Bi`a etc.).

A second aim of the project was the elucidation of the region's role in well-documented international trade networks during the Middle Bronze Age (ca. 2000 - 1600 BC), and the effects such a role might have had on local social and economic structures.

The excavations were carried out with the help of students from Leiden University and other institutions acting as site-supervisors; specialists in the fields of palaeobotany and archaeozoology from Groningen University, as well as Assyriologists from Leiden treat the finds with respect to sustenance and diet, agriculture and pastoralism and the written records of the ancient populations throughout their various culture periods. 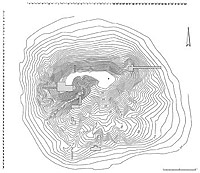 The architectural highlights that the excavations have so far yielded, apart from a diachronic overview of occupation from ca. 4500 onwards, comprise a temple with tripartite plan (ca. 3200 BC, with a possible predecessor in the Ubaid period, ca. 4000 BC), a walled town during the Early Bronze Age, with a monumental gateway and a chique town villa incorporating a luxurious bathroom; a Middle Bronze Age Administrative Centre, a Late Bronze Age palace of the Hilani type and a Parthian Period barracks-like building defended by a wide wall. Thus the first aim of obtaining a general overview of the history of occupation in the region was achieved.

These buildings are the manifestations of the regional importance of Hammam al-Turkman throughout its existence. Halafian occupation is so far not attested with coherent architecture, but amounts of Halaf pottery are encountered especially at the southern foot of the tell. During the Ubaid period an 11m thick deposit developed containing an uninterrupted sequence of houses (and a possible “temple”) with a good series of Northern Ubaid pottery. Agriculture (wheat and barley) and pastoralism (sheep and goat, few bovines) were the mainstays of life, and hunting provided some additional nutrition (including water fowl!). Fish from the Balikh was notably unimportant. Around 3200 BC the Late Chalcolithic occupation was capped by the foundations of a temple of the well-known tripartite plan-type. Its conflagration was followed by a two centuries-long hiatus. The Early Bronze Age is represented by a town of some 4 hectares, surrounded by a high defensive wall incorporating luxurious town houses with spacious suites, kitchens and bathrooms. An earlier phase of the Early Bronze Age (EB II) in the east of the tell does not overlap with the western EB III-IV. After a very short pause (some 50 years?), the Middle Bronze Age commenced with the construction of a large complex whose western part served official administrative functions. The complex was often refurbished in - unfortunately for us - mostly peaceful conditions: the inhabitants emptied everything before they started rebuilding, hence relatively few finds in context remained for us. Among these, however, are a Sumero-Akkadian dictionary (van Soldt 1995: 279ff.) and a few administrative texts and letters. A unique find was a sealed bulla, found near the cylinder seal with which it was produced (Meijer 1995).

The Middle Bronze age trading networks that are well known from textual evidence, such as that centered on the axis Assur-Kaneš/Kültepe, and that coordinated from Mari, involved traffic through the area of Tell Hammam. The possible role of a center like Hammam was one of the main reasons for starting the project; the pertinent texts mention a place called Zalpa, which should be located somewhere in this area, and of which Hammam might fill the requirements. So far such an identification - fortuitous in the best of cases - has not yet emerged, but there are enough possibilities to tie Hammam in with the trade between Assyria and Anatolia in a general sense. The last campaigns have concentrated on a small village at the southern foot of the main mound, which in antiquity stood apart from the latter (Meijer 1996 and forthcoming). It proved to have its own defensive wall, and its architecture seems to be planned and executed together with that wall, and with the same brick material; also the phasing runs parallel. One of the small finds to emerge from this area (squares U-W 42/43) is a cuneiform tablet with Old Assyrian leanings in the phraseology. 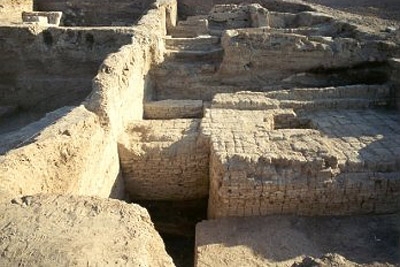 The Late Bronze Age palace, situated on top of the MB administrative complex on the main tell, was a Hilani with limestone orthostats reinforcing the main doorways in the official part of the building; the latter was separated from the more domestic quarters with extensive kitchen facilities by an extremely well-paved courtyard with excellent drainage (Meijer apud van Loon (ed.) 1988). This building, where a governor of sorts resided and corresponded with an unknown king (van Soldt 1995: 277f.), was deserted (the doorways were closed up with mud bricks) with the intent to return - a return that never happpened. A short squatter's occupation was followed (around 1350 BC?) by the final desertion of the site for about a millennium; some 75 years later the Middle Assyrian stronghold at Sabi Abyad, 3 km to the northeast, was founded.

Both for the Early and for the Middle and Late Bronze Ages we see the role of Hammam as one of a center in the marginal rain-fed agriculture zone, where those relying on agriculture met those relying on pastoralism (often perhaps from the same population source), and where the agricultural surplus could be used in the mediation of regional and international trade in other products (Meijer 1999).

The excavation results have generated some hypotheses on the socio-economic history of the region, with an emphasis on the early second millennium BC. It is thought, for instance, that centers like Hammam fulfilled a meeting-point function between various aspects of the economy, e.g. as market towns for villages in the neighborhood; these villages were inhabited by a mixed population of whom part spent time in the steppe with herds of sheep and goats while the others farmed the land. In this reconstruction there is no room for veritable nomads. The traditional dichotomy between city dwellers and roaming nomads therefore has to be replaced by a construct of towns and rural villages in close interaction (which includes the occasional armed conflicts!). Thus the so-called "Dimorphism" is modified to an important extent: no longer must one visualize the pastoralists and the villagers as belonging to different ethnic groups, and the antagonism of city-people toward 'nomadic' wanderers no longer seems realistic.

Some of these results are now being taken up in a new Faculty project, financed by NWO, called "Settling the Steppe" (q.v.).